“The way Liars continuously evolve their sound from album to album is unparalleled.”

“WIXIW cements Liars as the kind of band that can do whatever they want, and it’s always going to be worth paying attention to.” 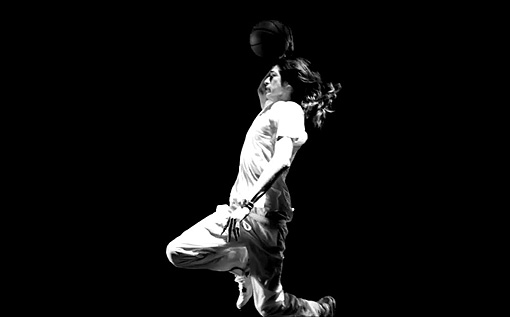 Angus Andrew, Julian Gross and Aaron Hemphill would like to share with you a new video for “WIXIW” the title track from their sixth studio album and announced details of a series of dates in the US and Europe.

Directed by Los Angeles-based artist Alex/2Tone the video premiered with Entertainment Weekly and is best described by Angus Andrew as “…like a beautifully shot black and white basketball version of Sisyphus.”

Alex/2Tone’s film showcases a basketball player shooting a hoop, time and time again watched by an audience of characters that includes the band, watch it here.

Aaron Hemphill explains further, “When making “WIXIW”, basketball was the only piece of the outside world we would indulge in.  Watching the players in a finite contest, whose performance was validated with stats that showed they either played a good, or bad game provided some sense of relief and envy for us. With songwriting, there is no such way to determine if you did a good job. No rankings or points. No time limit telling you to stop. Here in the “WIXIW” video directed by What You Steal, we find the world of basketball may not be so clearly defined. This task is shown with more in common to what we were feeling writing the music than what we were envying on the television screen. What You Steal developed this treatment without any input from us, which makes this coincidence seem frighteningly appropriate, and educational.”

WIXIW (pronounced “wish you”) is Liars’ critically acclaimed sixth studio album. Featuring heavily in the critics’ Albums of the Year (including NME, The Quietus, The Fly, Drowned In Sound, The Observer, BBC online and Clash), the album was recorded at the band’s studio in LA.

Self-produced, with additional production from Daniel Miller and mixed by Tom Biller, WIXIW is an album that is hard to shake, tough to pin down, and impossible to get out of one’s head even after an initial listen.

Simultaneously the most accessible and most challenging release from these iconoclasts, it is both a summation of Liars’ work up to now, and a complete break from anything you’d ever heard the band do previously.

Looking ahead to MAY as a part of the Wordless Music Series, Liars will be playing two very special shows in New York in May. The first show on May 18th will take place at The Temple of Dendur At The Metropolitan Museum Of Art and feature multi-media and site-specific surprises as part of the MET’s “PUNK: Chaos to Couture“ exhibit. For more information on this sold out show head to the MET’s website.  In case you missed snagging tickets for that show be sure to grab yours for the band’s Brooklyn Masonic Temple performance on the 19th. Tickets are still available here.  The band also has tour dates in Barcelona for Primavera Sound and Sónar’s 20th Anniversary (full details below, more European and US dates to be announced).

WIXIW is out now on vinyl, CD and download

The band’s first three albums, They Threw Us In A Trench & Stuck A Monument On Top, They Were Wrong, So We Drowned and Drum’s Not Dead were recently reissued on 180g vinyl and a limited edition 7” featuring unreleased live recordings of ‘WIXIW’ and ‘Pillars Were Hollow And Filled With Candy So We Tore Them Down’ is available free, while stocks last, when you purchase from the band’s official shop: www.liarsliarsliars.com