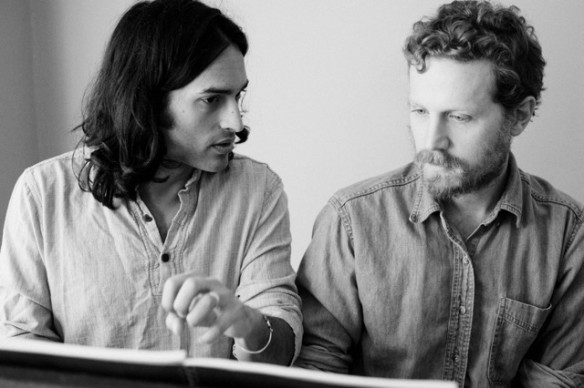 Anand Wilder and Maxwell Kardon have shared the latest single from their forthcoming album, Break Line, out on 14 July 2014. Listen to I’m To Blame here:

Described by Clash as “… a doozy. Arriving with a flamboyance worthy of Queen, ‘I’m To Blame’ matches an off kilter arrangement to some searing, soaring vocals”, the track features a blistering guitar solo from James Richardson of MGMT.

Anand Wilder (Yeasayer co-founder, vocalist/multi-instrumentalist) and Maxwell Kardon created Break Line with a community of friends over the past ten years.  Cultivated from a story the pair came up with huddled on a cold porch back in 2004, the album introduces us to cast of characters from a fictional coal-mining town, Greenbelt, telling their tales of betrayal, pride and love lost set to music inspired by concept albums and rock operas of the 1970s.

In 2008, Anand and Maxwell put together a core band with Ira Wolf Tuton (Yeasayer) on bass and Christopher Powell (Man Man) on drums. Britt Myers (Charlift, Yeasayer, Passing Strange) helped them put their music to tape as they stayed up late experimenting with sounds and arrangements. To round out the cast they enlisted friends from a myriad of bands: James Richardson (MGMT), bandmate Chris Keating (Yeasayer), Austin Fisher (Suckers), Haley Dekle (Dirty Projectors), Ryan Kattner (Man Man), K Ishibashi (Kishi Bashi), Aku Orraca-Tetteh (Dragons of Zynth), and more. I

In the years that followed, Wilder and Kardon found moments whenever they could to complete the project, and now, with this once-in-a-lifetime cast of collaborators, Break Line The Musical is finally seeing the light of day.