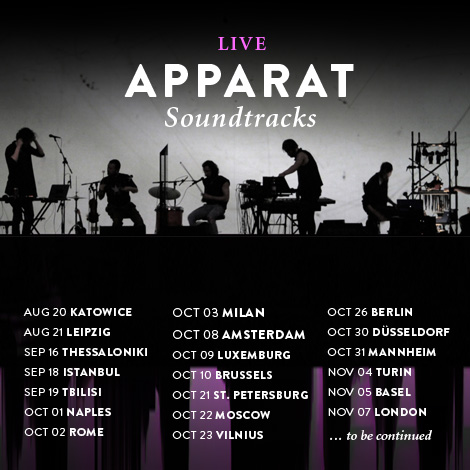 Apparat has announced details of a tour – Soundtracks Live – at select venues throughout Europe from August – November 2015. The dates begin at the Festival Tauron Nowa Muzyka in Katovice on 20 August and include a London show at the Barbican on 7 November 2015, which will be followed by a club night at the Village Underground later that evening.

Apparat’s set will include new music written for film and theatre and will be accompanied by long time collaborators Transforma. Transforma performed with Apparat on the 2013 Krieg and Frieden tour, projecting their live visual accompaniment to Apparat’s music for Tolstoy’s War and Peace and recently worked on the recent Martin Gore album launch in their hometown of Berlin (www.transforma.de).

In addition, Apparat has announced details of a series of DJ dates for a new set that originally premiered at Mute Mexico Festival in March this year. The set features exclusive edits and reworkings of Apparat and Moderat music, as well as music he has produced.

… with further dates to be added… Go to apparat.net for updates…