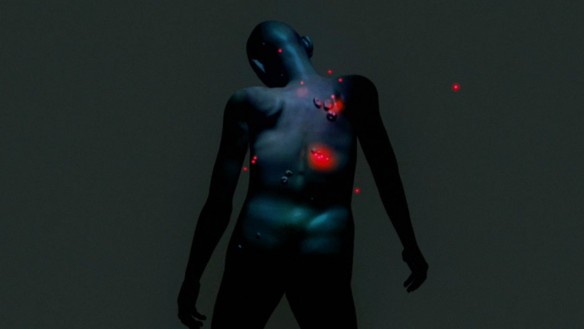 Venezuela-born, London-based producer Arca has today revealed the video for Sad Bitch, his latest collaboration with Jesse Kanda. Sad Bitch is taken from Arca’s acclaimed debut album Xen – out now on Mute – and can be viewed here:

The Sad Bitch video is the latest in a long line of collaborations between Arca and Kanda, who’ve had a unique creative relationship spanning ten years since they first met on online artists community deviantART. Kanda has provided a distinct visual identity to accompany Arca’s equally idiosyncratic music on Xen, creating the stunning album artwork as well as videos for Xen songs Thievery and Xen. Previously the relationship had produced works such as the pair’s TRAUMA series, Arca’s &&&&& mixtape.

The release of his debut full-length album marked a new stage in Arca’s incredible journey, further cementing his position as one of our most uncompromising, intriguing and forward thinking producers. A digital deluxe version of the album – titled Xen (????? Edition) – was also recently released, featuring Kanda’s videos plus music that had only previously been available on the long sold-out, limited edition, deluxe vinyl version of the album.

Arca also spent much of 2014 proudly collaborating with Bjork as co-producer on her recently released Vulnicura album. The pair continued to work together in 2015, with Arca joining Bjork’s live band for their debut Vulnicura shows in New York. Arca also soundtracked Hood By Air’s headline fashion show at the Pitti Uomo 87 event in Florence, Italy this year. Titled Sheep, the bespoke musical score was performed live on the night and then subsequently released as a free download via Soundcloud.

Meanwhile, Arca and Jesse Kanda have just announced a London live show at St. John at Hackney Church on 12 June, with support from Inga Copeland. This will be the pair’s first London show since their much talked-about appearance at the ICA in November 2014.

Arca has just completed two sold out acclaimed shows in the US, at the Bowery Ballroom in New York and the Forever Cemetery in Los Angeles, and returns to Europe later this month for a DJ set at Berghain before a series of live dates including Sonar and the Manchester International Festival.