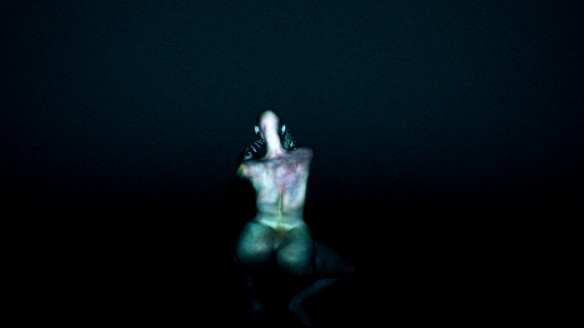 Arca recently announced details of his highly anticipated Xen debut album (released 3rd November on Mute) while at the same time debuting brand new track ‘Thievery’, the first to be taken from the album. Today, the 24 year old Venezuelan producer reveals the stunning video that accompanies ‘Thievery’, created by long-time visual collaborator Jesse Kanda. The pair have had a unique creative relationship since first meeting, aged 14, on an online artists community, culminating most recently with works such as their TRAUMA series, Arca’s &&&&& mixtape, and collaborations with FKA twigs (including on her breakout ‘Water Me’ which Arca produced and Jesse directed the video for). Kanda has also designed all the artwork and accompanying imagery for the Xen album.

Together the pair have created Xen, the star of the ‘Thievery’ video. While Xen is an album of mercurial forms, fluxing unpredictably from smooth to spiked to sweet, Xen is also a girl whose skin ripples and twists as she dances. Arca is Alejandro Ghersi, who, in turn, is also Xen: a metamodern self-projection, embodying a side of Arca that had previously been hidden by a producer who’s so far remained one of the most intriguing enigmas in recent electronic music.

Meanwhile. Arca is delighted to announce a series of European tour dates, including a UK show at London’s ICA on 27th November. The shows will be a further development of Arca’s relationship with Kanda, who first joined Arca live for a visual interpretation of his &&&&& mixtape at New York’s MoMA PS1 in 2013 and will accompany him at all of the shows.

Full dates below. Tickets for European shows are on sale now and London’s ICA tickets go on sale on 1st October.