Fresh from the glorious praise Du Blonde received for Welcome Back To Milk, comes a brand new video, three-date residency at the Shacklewell Arms in London and shows with Future Islands and Torres this September (full details below).

The new video, directed by Du Blonde, was entirely shot in LA: “The footage was shot on Super 8 by Kelsey McNamee. We wanted to try and get footage like the old home movies our families had when we were younger. So often footage like this is forsaken for videos shot on phones and the quality of those old memories is lost. We wanted to have something to show our kids.”.

Like her heroes of the late 60s at the Whiskey A Go Go on Sunset Strip, Du Blonde will play a three-night residency over the summer at the Shacklewell Arms. With handpicked DJs, supports and entertainment planned, the dates will be free to get in. Tickets can be reserved from https://dice.fm/artists/du-blonde

As well as playing End Of The Road and other festival spots, Du Blonde will support Torres at the Scala and Future Islands this September, reuniting with singer Samuel T Herring who lends his vocals to ‘Mind Is On My Mind’ on the album. Listen to that here: 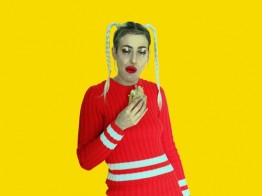