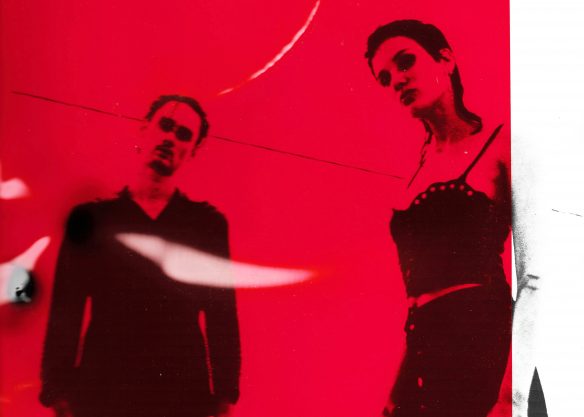 Lost Under Heaven are proud to reveal their latest single ‘Post-Millennial Tension’, the fourth track to be taken from new album Love Hates What You Become, due for release 18 January 2019 via Mute. The Manchester-based audio/visual duo comprised of Dutch artist Ebony Hoorn and British vocalist Ellery James Roberts will embark on a US Tour followed by a performance at Bermondsey Social Club in London on 15 November.

A sprawling ballad that continually evolves from sparse piano to full-blown orchestration, ‘Post-Millennium Tension’ takes inspiration for its title from Pre-Millennium Tension, the 1996 LP from Tricky – an artist whom the band note as a primary influence. “The song was written on the frustrations of our times – particularly those of the younger generation,” Ellery explains. “Through the internet people have gained an awareness of possibility but remain entrapped in the limitations of old. In my understanding, solutions to the world’s problems seem plentiful, yet we remain restrained by the systemic inability to act & held down by those mind made manacles – thus the lyric:  “we couldn’t work it out/ we’d sooner live in doubt.”

‘Post-Millennial Tension,’ premiered on Vevue, a decentralised Blockchain video platform, alongside a hyperlinked lyric treatment requesting fans to shoot footage as a response to the song, from which the duo shall assemble an edit, creating a collective work. Writing on Medium, Robert’s describes ‘Post Millennial Tension’ as a song responding to the Hydra-headed regression of culture that has come to be personified by Trump, Brexiteers and the numerous other Fascist/Populists on the rise since the release of their debut LP Spiritual Songs For Lover to Sing in 2016.

The band are continuing to build their live show which launched earlier this year with a residency in Salford’s notorious White Hotel, a show which Clash called a “Triumphant return.”  The band will return to the US for a run of dates this month, hitting Los Angeles, San Francisco, Portland, Seattle and New York’s Rough Trade, followed by a London date at Bermondsey Social Club on 15 November.  As part of the tour, Lost Under Heaven are experimenting with blockchain-powered platform Vevue, using blockchain technology to interact with fans in new ways.