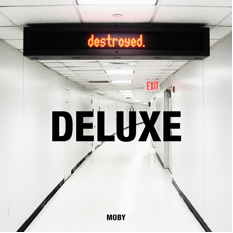 Moby is set to release a deluxe version of his latest album Destroyed on November 15th. The new deluxe edition of Destroyed consists of a 3-disc set that includes unreleased tracks, live footage and videos.

Disc one is the original album with all 15 tracks. Disc two features eight new tracks, plus alternate versions of tracks from Destroyed. Disc 3 is a DVD of all the music videos from Destroyed, including Moby’s self-made videos for “Be The One”, “Sevastopol”, and “Victoria Lucas”, plus the 10 finalist videos from the Saatchi and Saatchi video competition, and two Wilcox Sessions videos. To top it off, the impressive package comes with a 24-page booklet with all new photographs taken by Moby. To check out Destroyed Deluxe in detail click HERE and Download “The Poison Tree”, one of the new tracks exclusive to Destroyed Deluxe.

Moby’s new singles — “After”, out November 21st and “The Right Thing” (featuring Inyang Bassey), out December 13th, will come in two separate digital bundles each containing the original album version of the song, along with an array of remixes. Featured remixes for “After” include versions by Iamamiwhoami (click to listen), Drumsound & Bassline Smith and Ferry Corsten. remixes for “The Right Thing” will include, among others, Sharam Jey.

The supporting music videos for both “After” and “The Right Thing” are all from new directors who entered the Saatchi & Saatchi and Vimeo competition, for which Moby provided 3 songs from Destroyed.  The videos for “After” are provided by the winning director Alberto Gomez from Mexico, and one of the 10 finalists Antonin Pevny from Austria. Get a peak behind the scenes for the making of Pevny’s video HERE. Video content, audio, and pre-order links for Destroyed Deluxe can all be found at http://promo.moby.com/destroyed-deluxe/

New DJ dates have been added to Moby’s fall/winter tour, including headlining Fall Massive Festival on November 26th in D.C., a set in Miami at Mansion during Art Basel on December 3rd, and a gig on December 31st at Lizard Lounge in Dallas.

Since its release earlier this year, Destroyed has won over the media. Rolling Stone says, “Destroyed merges the gentle electronic tones and atmosphere of Brian Eno’s Another Green World with the sort of big-hearted, grandiose chorus of Moby’s own hit “We Are All Made of Stars.” Moby had time to stop by the Rolling Stone studio recently to film special acoustic versions of some of his hits, including “Porcelain” and “Natural Blues”, and talk about Destroyed in an exclusive interview. Check that out HERE.

Songs on Destroyed were written by Moby mostly late at night, in hotel rooms around the world when cities had gone to bed and the insomnia that worldwide travel can induce fueled his need to create.  Produced by Moby and mixed by Ken Thomas (Sigur Ros, M83) Destroyed is a soundtrack for empty cities at 2 A.M.