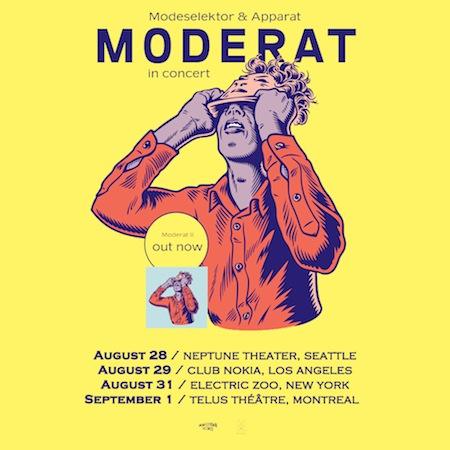 “the Modeselektor–Apparat melding Moderat is something of a stylistic banquet, showing off the astonishing range of each artist’s musical proclivities.”

““II is their best, most assured work to date and looks set to mark them out as a force as powerful as their respective parts.”

“Consuming II in pieces almost feels wrong; it lends itself to being listened to in one fell swoop.”

Berlin based electronic music trio, Moderat have just released their meticulous and dynamic sophomore LP, II via Mute. Comprised of Sascha Ring (Apparat), Gernot Bronsert and Sebastian Szary (Modeselektor), Moderat represent the very best in innovative electronic music infused with infectious and poppy vocals. II has dialed in the aesthetics of Modeselektor’s throbbing bass and tricky beats while maintaining the delicate vocals we’ve come to love and expect from Apparat. II is the most diverse and complex piece of work released by Moderat to date – confidently and capriciously capturing a broad range of the emotional spectrum.

You can watch the video for the album’s first single, “Bad Kingdom” HERE. Moderat also recently sat down with Eastern Collective to discuss the dynamic and direction of their collaboration, which you can watch HERE.

Poised to change the concept of what a live performance can be, Moderat have teamed up with long-time friends and visual artists collective Pfadfinderei to create an engaging and immersive show which will be presented to audiences in select North American cities beginning August 28th.