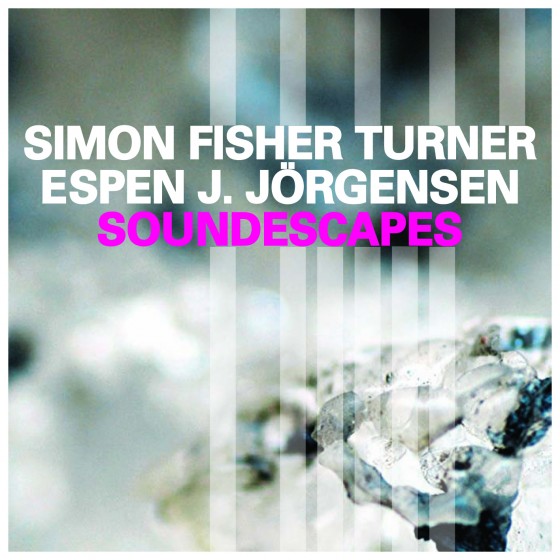 Soundescapes came into being through an unsolicited contact from Oslo-based electronic composer and film maker Espen J Jörgensen (The Sequential Art), who found himself haunted by Fisher Turner’s score to the David Lynch-produced vampire film, Nadja. Jörgensen sent tracks to Simon Fisher Turner, whose career in music can often be seen as a series of serendipitous meetings from an artist whose openness has found him doing everything from soundtracking the late Derek Jarman’s most important works, with no prior experience, to recording an album in the late 60s that was hyped to be Britain’s answer to David Cassidy.

Fisher Turner, on his 33rd album and Espen on his debut album, have never met, instead the two corresponded via email, and agreed that Jörgensen would send tracks to Fisher Turner, who would do with the sounds whatever he wanted, including throwing them away. “I was the cook,” Fisher Turner explains, “Espen was the ingredients.” Says Jörgensen, “We agreed that Simon would get the ‘final word’ by me not commenting on what he does, to ‘remake it in his own image’.”

Soundescapes speak of long hours mixing on laptop screens and the instant rush of new tracks downloading. They blend rubberised pixelated mania with the odd human cough and squelch. Soundescapes is a kind of gestalt thing. It is field recordings from a collapsed field, instant travel while staying in place. It’s a leap of faith, trusting both the unknown souls at the other end of the wires and the technology connecting them. “Here is a man who I’ve never met, probably never will meet,” Fisher Turner says, “and in this instance he was kind and mad enough to just keep sending me masses of noises and sound. All I had to do was WANT to make something with his treasure.” Jörgensen, “I count myself very lucky to have worked with him, though it was never my intention to work with him when I approached him – it just ‘happened.”

When working on his comic book documentary, The Sequential Art, Espen researched sound design. That lead to exploring the circuit bent instrument, foley sound and recording all kinds of instruments. But Jörgensen chose to throw it all overboard, and worked instead with Billy Gould of Faith No More on the soundtrack. Espen later gave the sound design recordings to Simon, which was the origin of Soundescapes. “I felt that Simon would do these recordings justice” says Jörgensen and continues, “Simon’s got this remarkable way of composing and mixing music, and with that he gave my sounds a home”.

You can trace Simon Fisher Turner’s career in music from the moment when, as a teenager, pop svengali Jonathan King gave him free reign to tinker with his Revox tape machine. King had plans to mould a new David Cassidy by way of Bowie, but Fisher Turner had too many ideas of his own. An album, Simon Turner, survives online as a what-if, but the real fruits of this apprenticeship with King were the hours spent obsessively taping, splicing, patchworking sound. And not just sound—still a working actor, Fisher Turner wove the worlds of film and television with the avant noise and proto-punk music scenes.  If Fisher Turner’s life from 1973 onward was a film, it would be one that no one would believe, but everyone with an interest in pop culture’s footnotes and punchlines would want to watch. It was a time spent oscillating between appearances with the Portsmouth Sinfonia, the scratch orchestra famed for its appearances on Brian Eno records, and being punched in the balls by Sid Vicious, of taking Robert Mitchum (during the filming of Winner’s remake of The Big Sleep), handcuffed, to a Siouxsie and the Banshees gig.