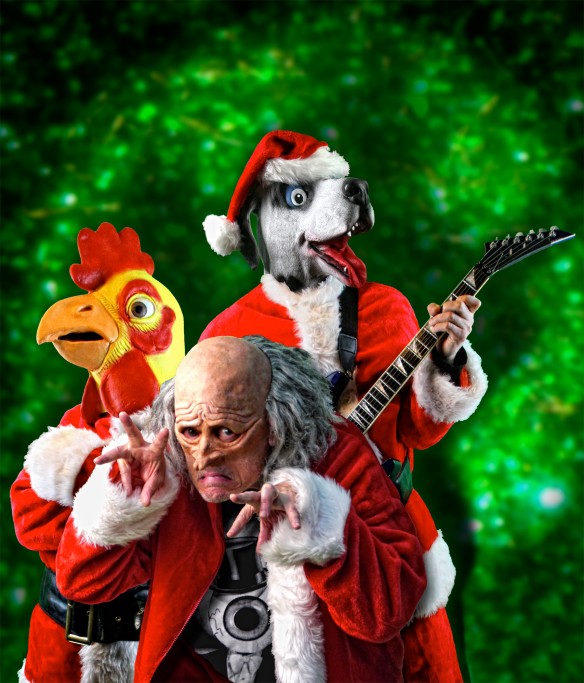 THE RESIDENTS present WONDER OF WEIRD TOUR
18 MAY – BARBICAN, LONDON

The Residents play a rare show at the Barbican, London on 18 May 2013, their first UK date since 2010’s ATP curated by Matt Groening.

Holding up the underground since 1972, The Residents celebrate four decades of unbridled creativity with Wonder of Weird, their 40th Anniversary Tour – full details over at www.residents.com.

Having recently come out as Randy, Chuck and Bob after remaining anonymous throughout the past four decades, the group now presents itself in concert as the ultimate offbeat power trio, pared down to guitar, keyboards/laptops and vocals. Snorting with glee and anticipation, the band will re-interpret and devour its classic material like a hungry horse inhaling hay, while still blowing minds at full speed!

With more than 60 albums to their credit – most comprised of new studio material – and having pioneered new forms ranging from independent recording to multimedia technology and performance art, The Residents have not only survived for 40 years, they’ve thrived. Over the course of a storied career, the group has built an audience too large and dedicated to be a cult following while steadfastly flying beneath the radar and staunchly defying classification. By constantly challenging and reinventing themselves, The Residents have never failed to keep their audience guessing.

Four decades after announcing their existence on this planet, The Residents are as prolific as they’ve ever been. Early adopters of home studio recording, the group – whose first release was the now-legendary “Santa Dog” single in 1972, followed two years later by the LP Meet The Residents – have eagerly embraced new tools as they emerged, from two-track tape up through today’s modern digital technology. Leaping early and enthusiastically into the worlds of CD-ROM, DVD, podcasts and Internet video, they also extended their artistic reach into the world of film and video. Now, for the first time, the genius behind The Residents’ full catalogue of 563 songs plus video and digital media, is brilliantly captured with the release of the Ultimate Box Set!

To celebrate their 40th Anniversary, The Residents recently announced the release of this Ultimate Box Set. On sale on Christmas Day for the princely sum of $100,000, the box set is packaged in a 28 cubic-foot refrigerator containing releases spanning the group’s entire career. The UBS holds well over 100 different products including 40 vinyl LPs, 50 CDs, and dozens of singles, EPs, DVDs, and CD-roms plus other releases. Thanks to the group’s diligence in archiving their releases over the years, there are no re-pressings in the UBS – each of the products is an original first pressing. In addition to this vast array of music products, each box set will also contain one of The Residents’ signature eyeball-with-top-hat masks.