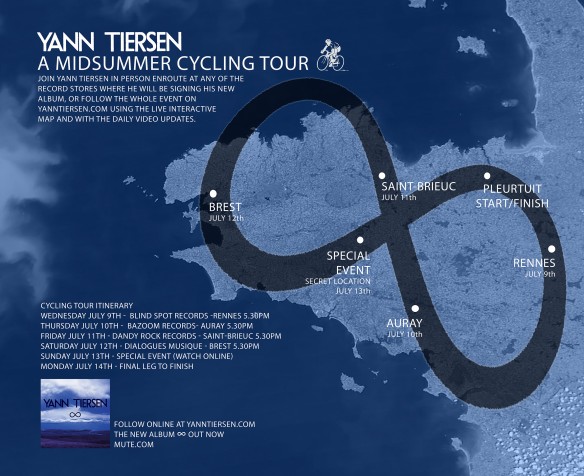 Yann Tiersen has announced a series of new dates in Europe, part of an extensive tour which has seen him already perform throughout the US, Canada and Mexico as well as at London’s ICA for a very special launch featuring Aidan Moffat. The September dates now include a show at Manchester Cathedral on 24 September, prior to an appearance at Royal Festival Hall, London on 26 September.

In addition, details of A Midsummer Cycling Tour – a unique cycling and signing tour across Brittany – has been announced. Tiersen will be cycling 1000km over six days, and en route will be stopping at Independent Record Stores for record signings with a few surprise musical stops on the day. You’ll be able to join him in person along the route at any of the Record Stores, or follow the whole event at www.yanntiersen.com using the live interactive map, with the daily video updates posted each evening.

Follow the tour and hear about surprise musical stops along the way here: www.yanntiersen.com