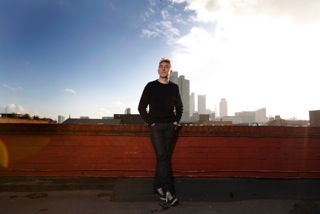 “so charged with life it crackles” – Metro

“Midsummer Evening, a glorious piece of psych-pop in the vein of MGMT or the Polyphonic Spree.” Simon Price, Wondering Sound

Yann Tiersen’s latest album ∞ (Infinity), is out now and you can watch the video for Midsummer Evening here:

Directed by Marcus Herring, whose previous videos have included Sebastien Tellier and Kavinsky, the video stars Andy Dick as an average everyday guy dealing with the end of the world, “I wanted to explore the humor in this situation… even though it’s the the last day on Earth, it’s just another mundane bad day for this character”

Midsummer Evening, which was recently remixed by Mogwai – listen here – is taken from the new album, ∞ (Infinity), which premiered last week with a sold out show at the ICA and a live streamed concert from Ushant island, Brittany, available to watch here.

You can get ∞ (Infinity) here:

Yann Tiersen is touring throughout 2014 with a UK date at the Royal Festival Hall in London on 26 September, full details below: