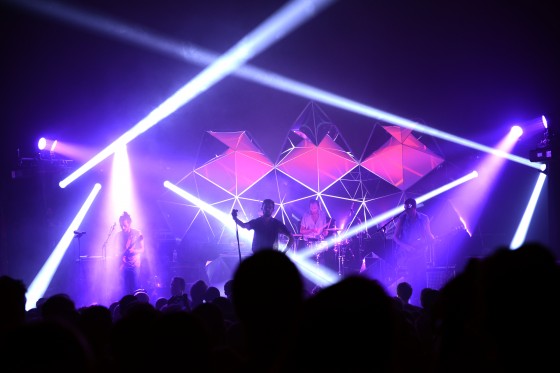 The latest single to be taken from the acclaimed Fragrant World, is the gothic and very addictive “Reagan’s Skeleton”, due for release on 26 November. “A sure-fire dancefloor killer“ (Time Out), “Reagan’s Skeleton” has already been championed by Zane Lowe and Nick Grimshaw on Radio 1 and John Kennedy on Xfm.

The new video, featuring a live performance of “Reagan’s Skeleton”, is directed by acclaimed artist and film makers Iain Forsyth and Jane Pollard who have previously collaborated with Nick Cave & The Bad Seeds, further info at: http://www.iainandjane.com/

Yeasayer have finally announced their rescheduled European tour for December.  The tour will catch the band on the Fragrant World Tour featuring all of their new songs, reworkings of old, and previously unreleased tracks as well as their new light and stage show.

Learn about the concept and design behind the set design here: http://youtu.be/HYOBgS7QeHk

Researched and constructed over the last few months, Yeasayer’s new stage design is built of mirrored structures (some 9 feet tall) that serve to reflect and redirect light, receive projections, or glow from the seams like a living organism. The whole effect is alien looking and fits in with Yeasayer’s otherworldly sounds.  A highly ambitious project, it continues to show Yeasayer’s dedication to elevate the fans’ live experience and expands their aesthetic to beyond just playing their songs live.