Release all their studio albums individually on vinyl – including Out Of Reach, available for the first time since 1978 (CD/LP/Digital) 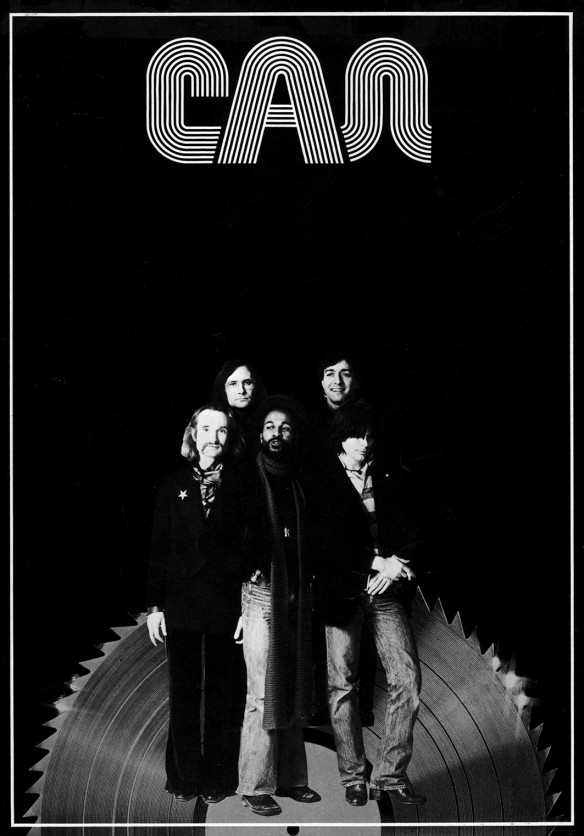 Can are making all of their studio albums available individually on vinyl, including Out Of Reach, which will be available officially for the first time since 1978 and for the first time ever on CD and digital. All the albums are remastered from the original tapes, are pressed on 180gm vinyl and include digital copies.

Listen to Serpentine from Out Of Reach here:

These releases will be followed by the individual vinyl releases The Lost Tapes Vol. 1 to 5, in November 2014. Originally released as a box set in 2012 and now sold out, The Lost Tapes will now be available as five separate vinyl releases. Curated by Irmin Schmidt and Daniel Miller, the albums compile recordings from 1968-1977 and include studio material recorded at Schloss Nörvenich and Can Studio, Weilerswist with the Can line up of Holger Czukay on bass, Michael Karoli on guitars, Jaki Liebezeit on drums and Irmin Schmidt on keyboards, and on most tracks, vocals from Malcolm Mooney or Damo Suzuki.

Can was founded in 1968 by Irmin Schmidt, Holger Czukay, Michael Karoli and Jaki Liebezeit who formed a group which would utilise and transcend all boundaries of ethnic, electronic experimental and modern classical music. These vinyl releases catalogue the changing eras of the band, and the different powerful singers like Malcom Mooney and Damo Suzuki and collaborators such as Reebob Kwaku and Rosko Gee.

Can’s powerful influence has never diminished, and their indelible mark is apparent in the bands who freely acknowledge their importance – from Portishead, James Murphy, New Order, Factory Floor, Public Image Ltd, Mogwai, Kanye West (who sampled ‘Sing Swan Song’) and Radiohead – as well as across other disciplines such as visual art and literature.

The Can remastered vinyl releases follow the phenomenal success of 2011’s 40th anniversary release of Tago Mago (awarded 5* from MOJO, Uncut, Artrocker and Record Collector), The Lost Tapes (which featured heavily in the Albums of the Year 2012) and 2013’s Cyclopean EP (Irmin Schmidt, Jaki Liebezeit, Jono Podmore, and Burnt Friedman) and the Can Vinyl Box.

Earlier this year, Faber & Faber announced they will release a Can biography / symposium, curated by Irmin Schmidt. The biography will be written by Rob Young and the symposium section will use Can as a starting point for a collection of stories, statements and interviews. For more information visit: http://fabersocial.co.uk/2014/03/irmin-schmidt-on-the-can-biography/

The 33 1/3 series of books have just announced that Alan Warner, a long time fan of the band and the author of the sleeve notes for the acclaimed Can Vinyl Box release, will release a book about Tago Mago in January 2015. For further information visit: http://333sound.com/2014/07/07/the-33-13-author-qa-alan-warner/

Delay / Unlimited Edition / Can / Rite Time / Out Of Reach