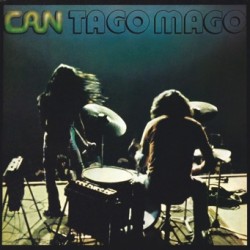 Tago Mago, the first album with Damo Suzuki on vocals, features the Can line up of Holger Czukay on bass, Michael Karoli on guitars, Jaki Liebezeit on drums and Irmin Schmidt on keyboards, and was recorded at Schloss Nörvenich in 1971, released later that year on United Artists.

Can’s influence is well known and far-reaching and the impact they made on music is felt today as keenly as it ever has been. They themselves have always been impossible to classify and reflecting this, the scope of artists who in recent years have cited Can as a major influence is varied. Of all the band’s oeuvre, Tago Mago has been most often cited as an influence for a host of artists including John Lydon, Radiohead, The Fall, Ariel Pink, Fuck Buttons, Sonic Youth, Factory Floor and Queens Of The Stone Age.

Listen to ‘Bring Me Coffee Or Tea’, as featured on the OST for the 2010 film adaptation of Haruki Murakami’s novel Norwegian Wood on SoundCloud.

To further celebrate this landmark album, Abtart gallery in Stuttgart (16 Sep – 5 Nov) (www.abtart.com) and Künstlerhaus Bethanien in Berlin (24 Nov – 18 Dec) (www.bethanien.de) will host Halleluwah!, a visual homage to Can. Artists have been invited to interpret Can’s pioneering role in composition, sound, playing technique, and group dynamics.

Comprising painting, drawing, videos, objects, and sound pieces that relate to the broad spectrum of the band’s manifestations and to the facets of the collective, including critical considerations of its being turned into a myth, some works will respond to the covers of CAN albums, others will be investigations or continuations of sound into the present, while yet others will simply be hallucinatory bows before these great musicians. For further information, and a full list of confirmed artists which includes Albert Oehlen, Daniel Richter, Malcolm Mooney, Carsten Nicolai, go to: http://www.spoonrecords.com/.

All 14 of Can’s studio albums have been newly cut to vinyl from the remastered tapes for release as a vinyl deluxe box set in early 2012. This will include CDs of all the albums, extensive booklets, an exclusive never released live album (vinyl only) and a newly remastered “Out Of Reach” previously unavailable! The vinyl deluxe box set will be available for pre-order at the beginning of October 2011.

To commemorate the 10th anniversary of Michael Karoli’s death on 17 November 2011, Spoon Records will offer a Best Of Michael Karoli Edit for free download on their site www.spoonrecords.com.