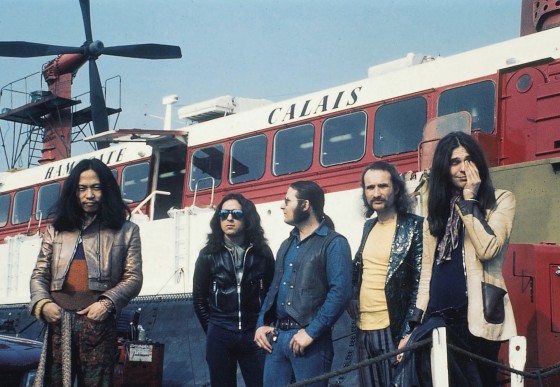 Mute and Spoon are delighted to announce that, due to phenomenal demand, Can’s The Lost Tapes will be released as a 5 LP box set on 180g vinyl on 3 December 2012.

As is now known, when the legendary Can studio in Weilerswist was sold to the German Rock N Pop Museum, they bought everything, including the army mattresses that covered the walls for sound protection, and relocated it to Gronau.

Whilst dismantling the studio, master tapes were found and stored in the Spoon archive. With barely legible labeling, no one was sure what was on these until Irmin Schmidt and long time collaborator Jono Podmore started to go through over 50 hours of music.

Richard Hawley: “Can are impossible to classify and its impossible to ignore their seismic influence on so many diverse musical paths, I’m so glad what was lost has been found”

Mogwai’s Stuart Braithwaite: “I can honestly say that there isn’t another band who sound like Can. Their music was of a future that we haven’t yet arrived at. Influencing people with their ambition more than just music we’re incredibly lucky to have found even more of their music to wonder at. God bless Can.”

New Order’s Stephen Morris: “Can are the most revolutionary band ever, hearing Monster Movie for the first time was like stepping into another world. You Doo Right is the reason I took up the drums in the first place. It’s not a song, it’s a journey. I love everything they have ever done.”

Wild Beasts’ Tom Fleming: “Can are, along with very few others, what I consider to be the zenith of how a group can play together; loose and sensuous, but tightly coiled and always ready to go off; academically trained but gloriously, beautifully casual. I’m not at all surprised that unheard-of recordings exist, they sound like they just did it, every day.”

Factory Floor’s Gabe Gurnsey: “Can is pure escapism. I have great memories of driving back through the British countryside after FF recording sessions listening to ‘Oh Yeah’ over and over, dancing to ‘I Want More’ in the early hours and wishing I’d written ‘Quantum Physics’. Repetition is the platform for free thinking, something we try to mirror in Factory Floor.”

With a phenomenal canon of work that includes Tago Mago, which celebrated its 40th Anniversary in 2011 (the anniversary release was awarded 5* from MOJO, Uncut, Artrocker and Record Collector), The Lost Tapes is an opportunity to hear unreleased material from this iconic band – whoever thought that would be possible?

Watch a trailer for The Lost Tapes vinyl here: http://youtu.be/vsLWlVdIbk4