Listen to William Orbit’s Interstellar Mix of Erasure’s ‘Star’, previously unavailable digitally and featured on the band’s 30th anniversary deluxe release of Always – The Very Best Of Erasure out on 30 October 2015

William Orbit (famed for his work with Madonna) remixed ‘Star’ in 1990, and the track was previously only available on the limited 12” release in the UK. The original version is featured on the band’s Number 1 album, Wild!

2015 sees Erasure, one of the UK’s most enduring award-winning songwriting duos, mark the 30th anniversary of their first release and to celebrate, Mute / BMG have announced a series of releases that kicks off with ‘Sometimes (2015)’ a brand new version of their classic single, out on 23 October, and Always – The Very Best Of Erasure out on 30 October 2015 and continues into 2016, the anniversary of their debut album, Wonderland.

Always – The Very Best Of Erasure – will be released on CD, download and deluxe 3CD / download. The single disc features hit after hit – from ‘Who Needs Love Like That’ (30 years after its original release in September 1985), the perfect pop of ‘A Little Respect’, to ‘Blue Savannah’, ‘Stop!’, ‘Take A Chance On Me’ (taken from the number 1 single ‘Abbaesque’ , ‘Love To Hate You’ and ‘Oh L’Amour’ (taken from their debut album, Wonderland (1986) plus the brand new version of ‘Sometimes’, originally released in October 1986. 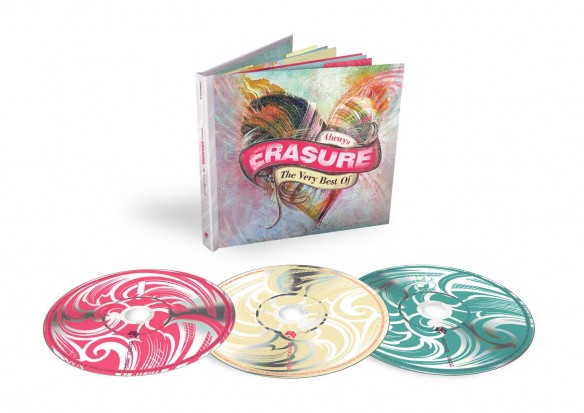 In addition to a full CD worth of hits that will be familiar to anyone that’s owned a radio, television set or music player over the past three decades, the deluxe CD issue will come with two further discs of remixes, packaged in a hardback book format with a booklet and archive photographs. CD2 and CD3’s tracklisting is an eclectic mix from past to present featuring remixes from Moby, William Orbit, The Grid (Richard Norris & Dave Ball of Soft Cell) plus brand new remixes from Grumbling Fur, GRN and Vince Clarke, full tracklisting below.

‘ALWAYS’ – THE VERY BEST OF ERASURE

Love To Hate You

Take A Chance On Me

Always – Microbots Inside Your Brain Mix

You Surround Me – Mark Saunders Remix

Am I Right? – The Grid Remix

In My Arms – BBE Remix

Be With You – Starshapes Remix

The BRIT and Ivor Novello winning pop duo have released a staggering number of albums, including 5 UK Number 1s, 17 top 10 singles (35 singles charted in the UK Top 40) and toured extensively, most recently with The Violet Flame worldwide tour which included two sold out dates at London’s Forum.

The anniversary celebrations continue into 2016, 30 years after the release of their debut album Wonderland, with the release of a deluxe super box featuring extended versions, B-sides & rarities, live tracks, remixes and much, much more. A series of vinyl reissues begins in Feb 2016 with Wonderland, The Circus and The Innocents available on 180gsm vinyl.