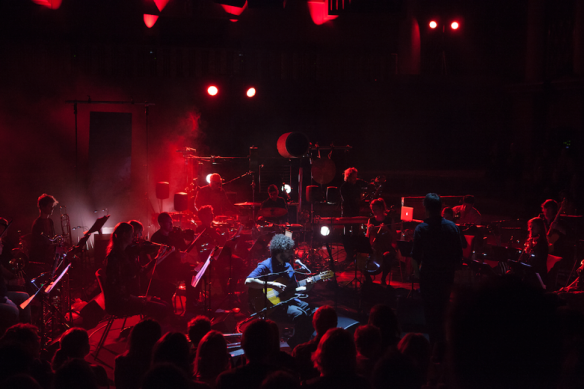 Physical formats of the new live album are available for pre-order via Pledge Music. Visit Pledge for more information.

José González & The String Theory: Live In Europe was recorded during their sold-out 2018 European tour and features stirringly original renditions of songs taken from González’s three celebrated solo albums: 2003’s breakthrough debut Veneer, 2007’s In Our Nature, and 2015’s Vestiges & Claws. Among numerous highlights found on the record, fans are treated to new visions of González’s classic songs such as “Crosses,” “Down The Line,” “Every Age,” and “Let It Carry You,” as well as remarkable reworkings of his versions of The Knife’s “Heartbeats” and Massive Attack’s “Teardrop.”

The String Theory is a Berlin and Gothenburg-based artist collective, think tank, and experimental chamber orchestra that explores the outskirts of contemporary classical music, electro, noise, Neue Musik and pop by means of workshops, studio recordings, and live performances.

González’s partnership with P.C. Nacht, the Musical Director and Conductor of The String Theory, began in 2009. During an interdisciplinary recording workshop in the singer-songwriter-guitarist’s hometown of Gothenburg, Sweden, they recorded a version of González’s “Cycling Trivialities.” Their debut live performance under the name The Gothenberg String Theory at Gothenburg Concert Hall in April 2010 gained high critical acclaim, prompting comparisons to Krzysztof Penderecki, Arnold Schönberg, and Nico Muhly.

Tickets for González and The String Theory’s spring North American tour are on sale here. Stops include a pair of shows at the Los Angeles Theatre and two at New York City’s legendary Apollo Theater. A full itinerary is available below.

March 19 – Buffalo, NY – Center for the Arts at University of Buffalo