An Introduction To … Laibach / Reproduction Prohibited 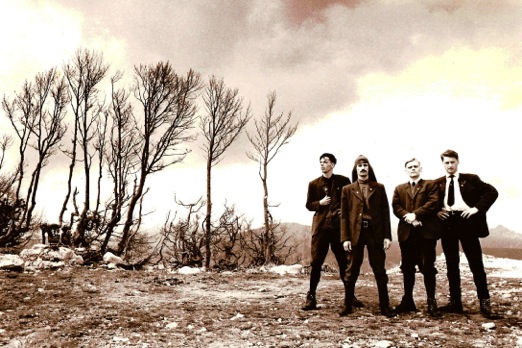 Laibach release An Introduction To… Laibach / Reproduction Prohibited, on 3 September 2012. The album release follows their recent Iron Sky OST release, the Monumental Retro-Avant-Garde show at the Tate Modern and coincides with a series of European dates (details below)

Opening with their interpretation of Mute’s first release, The Normal’s Warm Leatherette (here translated as Warme Lederhaut, Laibach premiered the track at the Short Circuit presents Mute festival, Roundhouse in May 2011), the tracklisting demonstrates Laibach’s unique take on the cover version.

From the sublime, Laibach’s interpretation on The Beatles Across The Universe would melt even the toughest of hearts, to their bombastic cover of Europe’s Final Countdown, this is a window into Laibach’s own view of pop music, and to the humour that permeates their work.

Reproduction Prohibited features two tracks from Volk (2006), Laibach’s album of reinterpretations of national anthems which uncovers the violence and the pop intrinsic in the national anthem, surely the ultimate pop song. Here Germania reinterprets Das Lied der Deutschen, originally written in 1797 and used after World War I as the national anthem of the German Empire at the time of the Weimar Republic, while Anglia uses John Bull’s God Save The Queen as its inspiration.

Mama Leone, perhaps not familiar to many in its original version, sold over 20 million copies when it itself was covered by Bino in the late 70s. B Mashina, written and performed by popular Slovenian rock group Siddharta, who asked Laibach to remix or remake their song, was originally released on 2003’s WAT. An additionally remixed version is also featured in the soundtrack to IRON SKY (directed by Timo Vuorensola), a dark science fiction comedy about Nazis invading earth in 2018, after escaping to the Dark Side of the Moon in 1945.

Pop references itself when Laibach take on Juno Reactor’s God Is God, which was itself influenced by Laibach’s cover of Austrian group Opus’ Live Is Life, included here in English ‘symphonic’ version (titled Opus Dei), and in German version, translated as Leben Heisst Leben. Laibach’s version of God is God was also released before Juno Reactor’s released their own, so many people still believe that Laibach’s version is the original one and Juno’s version a cover.

Elsewhere on the album, Laibach tackle The Beatles and Queen. Taken from Laibach’s album Let It Be, Across The Universe and Get Back both feature, and Queen’s hit song One Vision is here translated into a German Geburt Einer Nation (The Birth of the Nation). The choice of a language, title as well as the genre of interpretation here all reveal themselves as powerful instruments!

Bruderschaft, written by Laibach is included here as a double twist cover. Laibach were invited to cover a Kraftwerk song for a compilation. But instead doing a straight Kraftwerk cover, the band decided to rearrange Laibach’s own – original – song from 83’, known as Brat Moj (Brother of Mine) in German, with the carefully reconstructed Kraftwerkian sounds.

“The cover version can be seen as a cynical populist tactic by artists lacking in originality, a gesture of contempt or as a respectful example of good taste and seriousness. Laibach’s open rejection of originality makes the first view irrelevant and the new originals are too ambivalent to be either entirely contemptuous or totally respectful. A Laibachised song is sometimes more kitsch, sometimes more serious and sometimes more emotional than the “old original” it is based on. Laibachisation re- and de-animates a song, reviving it for long enough to dispatch it again.” – Alexei Monroe, author of Interrogation Machine: Laibach and NSK, from the Reproduction Prohibited sleevenotes

The CD cover art of the ‘An Introduction To…Laibach’, titled ‘REPRODUCTION PROHIBITED’ was painted by member(s) of the group in 1981 as the interpretation of the famous Rene Magritte’s work, ‘Not to be Reproduced’, from 1937.

The mirror, a fragile and sometimes distorted reflection of reality, was of great interest to Magritte, as it is to Laibach.  When viewing one of his images, or when listening to Laibach’s covers, there is a sense that a content, placed within a frame/the context, might, by a twist of perception, be seen as a reflection in the mirror, a perception that suddenly turns the space of the picture/song inside-out.

By quoting and interpreting this significant work by Magritte, Laibach offer a clear tool, if not a perfect key, how to solve the riddle of understanding their method, their philosophy and their humour in cover versions, as we hear them on this album.