I START COUNTING have announced details of the CD and digital release of two albums of unreleased tracks and demos from 1985 and 1986, Re-fused and Ejected – out on 25 March 2022.

Previously only available on (sold out) cassette for Independent Label Market 2021, the albums compile unreleased tracks and demos recorded in 1985 and 1986 for their albums My Translucent Hands (1986) and Fused (1988).

Listen to ‘Talk About The Weather’ from Re-Fused:

I Start Counting are David Baker and Simon Leonard. The duo formed in 1982 and signed to Mute in 1984, although their history with the label started much earlier when in 1979 Simon Leonard jumped on stage to break up a tussle between Daniel Miller and Robert Rental at a Paris performance of The Normal & Robert Rental. Their first singles, ‘Letters to a Friend’ and ‘Still Smiling’, were both produced by Miller and preceded two album releases, My Translucent Hands (1986) and Fused (1989). By the beginning of the 90s, Baker and Leonard had become Fortran 5, releasing three albums for the label, before reincarnating in 1996 as Komputer, the name they continue to record under.

Baker and Leonard, through all their iterations, have a very British knack of weaving pop masterpieces from often suburban and mundane subject matter – ‘Talk About The Weather’ and ‘625’ deal with youthful crushes and TV addiction and throughout their releases the duo take on small town discos, big dirty cities, young love and serial killers through the prism of electronics such Korg PolySix and the Greengate DS3 sampler. 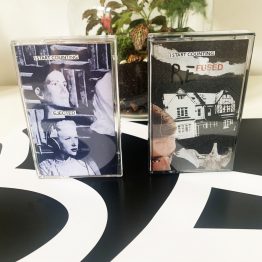