The Knife announce Shaking The Habitual 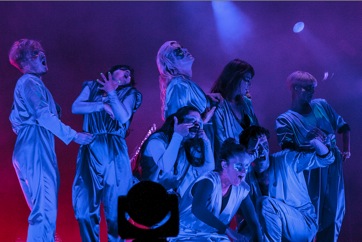 We are excited to share with you details of The Knife’s long-awaited Shaking the Habitual  North American Tour, kicking off at the Coachella Music Festival on April 11th, 2014. These dates mark The Knife’s return to North America, where they have not been seen since their 2006 Silent Shout performances. General on-sale for all listed tour dates is Saturday, January 18th.

The Knife have released the following statement about what you can expect from their live performance:

“Shaking the Habitual, the album, lays the groundwork for this show. Based on the artistic and political ideas therein, we play with the expectations and question habits of the concert, the dance performance, the club and the music festival.

Working within a highly commercial, professionalized and male-dominated music industry, we strive to twist and strangle hierarchies to find other ways of organizing work and its conditions. Disrespecting borders between digital and analogue, fake and real, professional and dilettante, star and cast, experimental acts and glamorous shows, nature and culture, audience and artist, blood family and chosen family, dance and action, a Buchla and bongo and the sound of a hit and a kiss.

We use the full potential of the electronic concert. In addition to bodies playing electronic music, we suggest different bodily engagements. We suggest dancing together as a mobilization, a collective moment for everyone in the room – on and off stage – to take part in.

In 2013 we played at clubs and festivals in European cities. Now it’s 2014 and we’re about to tour North America. With care and attention, we gathered our impressions and got back together to rework the show.

This is a continuation.

Moves are added and changed.

Some instruments are electrified and more voices are heard.

Things glow and along the way we have elevated ourselves.

This time, we, The Knife, are a group of people with diverse approaches to dance, moves and music. Some of us are musicians, some of us are vocalists, some of us are choreographers, some of us are experienced performers and some of us are not. We are very proud to announce that Shannon Funchess from the electronic punk duo Light Asylum (New York) is joining the show. Already familiar with the project as she sings on the record, she is now with us on stage.

We learn from each other.

This is a suggestion. For all of us.”

The Shaking the Habitual Team, spring 2014:

The Knife’s Shaking The Habitual was included in the following