Bowers & Wilkins presents ‘An Evening with Mute and Rough Trade’ 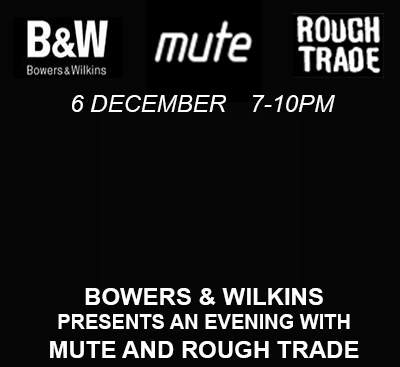 Register at http://bit.ly/BWmuteRoughTrade for guestlist

Maps, aka James Chapman released his Mercury shortlisted debut album, “We Can Create”, in 2007 followed by 2009’s “Turning The Mind” and is currently completing work on the new album, due out in 2013. Tom Cohen, the frontman from S.C.U.M, released the debut album, “Again Into Eyes” in September 2011 to critical acclaim.

Everyone who registers to attend will receive a brand new track from Polly Scattergood – Disco Damaged Kid – the first taste of what’s to come from her forthcoming album, the follow up to the eponymous debut from 2009.

Not only that, but everyone coming to the event will be entered into a prize draw for a pair of Bowers & Wilkins’ award-winning P3 headphones and will receive a Mute CD featuring tracks from 2012’s releases including VCMG, Yeasayer, Liars and Can, plus unreleased material from Polly Scattergood, Maps, Crime & the City Solutions and Big Deal’s albums due out in 2013.

This unique event will be popular and places are limited so make sure you register at http://bit.ly/BWmuteRoughTrade as soon as possible to guarantee your spot.