Aaron Hemphill has shared the video for ‘The Timeless Now’, taken from his debut solo album, Scented Pictures. Released under the name Nonpareils, these are his first recordings since an amicable departure from Liars in 2016. Nonpareils’ Scented Pictures is out on Mute on 6 April 2018.

Hemphill and Blahutová met in Prague (where she was working as an architect, VJ and DJ) and was the first person he thought of when it came to commissioning a video. He explains, “Katerina has such an inspiring enthusiasm and energy for music, art, and things I never knew were fascinating until she showed them to me in a different way. I had seen visual work from her and, while each project looked a bit different, I felt that it could be different parts of the same world that she sees.”

Blahutová goes on to explain the video concept, “We live in a world which keeps us constantly grounded by clock time. The passage of time is highly context-dependent and intimately entangled with our activities and surroundings. Our time can be measured in indeterminate blocks between meals, checking for notifications, waiting for the end of a shift, time to catch a train, time to achieve results, time to fulfil life goals. Does wasting time negatively affect others’ valuation of us, but conversely actually make us more human? Can a certain time period be locked in a place? Does a living space like home translate into time?”

The songs on Scented Pictures, recorded by Hemphill in Berlin, are metaphysically restructured pop, the wealth of sounds and sonic processes at Hemphill’s disposal having diversified and warped since Mess, his final studio album with Liars. Based in Berlin since 2015, Hemphill started working on Scented Pictures by recording stacks of acoustic instruments while, in his words, “doing the silliest things”. He played the drums without click tracks, encouraged his engineer to distract him, and played the piano while allowing poorly set-up microphones to fall away from the body of the instrument.

Ultimately the sound palette grew out further, taking in a vast array of virtual instrumentation too, all glitched and processed into off-kilter music. Having sought out new sources of inspiration following a long period of focusing solely on instrumental music, Scented Pictures sees Hemphill’s songwriting take on yet another new form, mutating into something woozier and increasingly abstract—without sacrificing the hooks in the process. Nonpareils Scented Pictures is out on 6 April 2018. 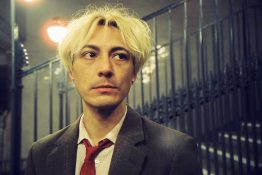