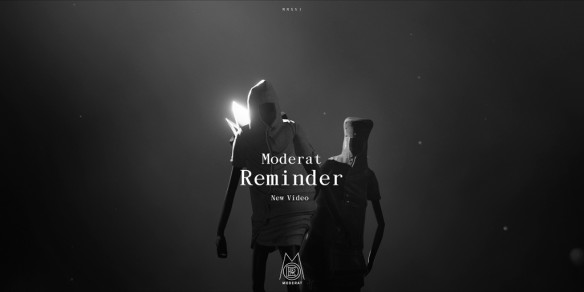 “The song is huge and airy up top, with Apparat’s big, sweeping atmospheric flourishes high in the mix. And it’s intricate down low, with Modeselektor’s quick-hit drum pattern serving as a subdued anchor. The beat could easily hold its own as an instrumental, but delicate, dreamy vocals come in with some dark storytelling and vivid depictions.” — Stereogum

“Moderat has well-earned a reputation for balancing the experimental with the dancefloor rockout, and all of the subtleties within this track beg for repeat listening.” — Cool Hunting

“The cut is driven by a manic whap of percussive beat work and velvet synth textures, which all support the smooth and plaintive vocals of Apparat.” — Exclaim!

In this video, a rebellious teenager slaves away in a dystopian world, harvesting crystals from a vast grey landscape. This sparkling bounty is given as an offering to a tribal deity, who resides in a shrine guarded by sentinels with green glowing masks, where he is constantly under attack from an army of drones.

Moderat fuse rousing basslines and intense breakbeats with gripping songs and a highly individual voice. The trio were initially brought together by Berlin’s now legendary rave scene, and with this as their common foundation, new album III signifies Moderat’s maturation in modern pop and mastery of the group.

As previously announced, Moderat’s III is out April 1st on Mute/Monkeytown. “Reminder” is out today on Digital Bundle, 10” out Feb 26th and 12” out March 18th. “Reminder” is available on streaming services and as an instant grat download with all iTunes preorders. The trio will take their impressive live show all over Europe and North America in support of this release. Pfadfinderei will join Moderat, taking the reins with visual direction. All dates are below.