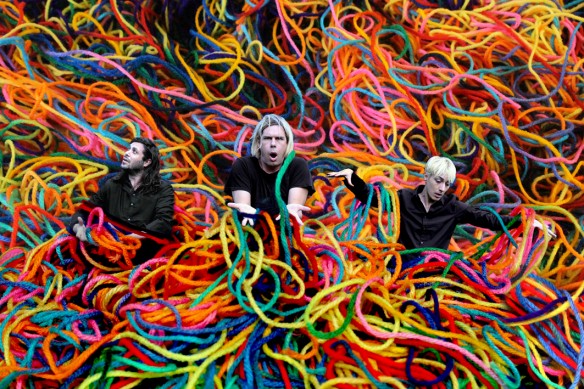 LIARS – Angus Andrew, Aaron Hemphill and Julian Gross – will release a brand new album, the follow up to WIXIW, in March 2014.

Tracks from the as-yet-untitled album were performed on recent dates at the Metropolitan Museum of Art’s Temple of Dendur, MoMA PS1, Primavera Sound and Sónar and the album has been teased by the band in a series of cryptic trailers which can be viewed here:

The band, currently finishing the album at their studio in LA, have said that work on the new album was “almost the exact opposite experience to producing WIXIW”. WIXIW saw Liars experimenting with unfamiliar techniques, and, according to Angus Andrew, “Instead of being doubtful, work on the new album has been immediate, fun, instinctual and confident”. Learning from their experiences with WIXIW has found the band embracing spontaneity and, as Andrew explains, “Creation for creation’s sake. No rules. No mistakes’.

Liars were recently invited by Hedi Slimane to rework a track to soundtrack Saint Laurent’s SS14 Paris Fashion Week catwalk show. Listen to their 19-minute version of ‘Mr Your On Fire Mr’ here: