The lead track from Ora The Molecule’s debut album, Human Safari, “The Ball” follows previous singles “Creator” and “Die To Be A Butterfly.” Human Safari is out July 23 on Mute.

Pre-order Human Safari here. All physical editions come with a one-of-a-kind Polaroid photo with doodle done by Nora Schjelderup (see artwork for her previously released singles for an example of her drawings).

Nora Schjelderup, the creative mind behind the Ora The Molecule moniker, says the eponymous ball acts as a metaphor for the destruction of cooperation in the face of selfishness and greed. “Community is so important. It’s the most important,” she says. “But Human Safari is also criticizing when there’s a lack of community. “The Ball” is about everyone wanting the same thing but there’s only one. And this ball is going so fast that it could actually kill you if it hits you the wrong way. Strong division creates friction and unhealthy competition. Community is everything, but it starts with the individual.”

Of the video, Schjelderup details, “The video was shot and directed by the Polish director/ cinematographer Kristof Gerega. We met in Berlin, and shortly after he came to visit us in the mountains of Andalucia, Granada. We shot the film over a weekend in between stealing oranges from the side of the road, swimming in the Alboran Sea, running around with (the then puppy) Olive, and borrowing a horse from the husband of the lady that worked in the local grocery corner shop.”

She continues, “’The Ball’ is about the chase. We wanted to create an atmosphere of urgency at a steady pace. Something fast in slow motion. Like the speed of everyday life in contrast to the steady pace of a human lifetime. It goes slow, but fast at the same time. The horse idea was derived from my childhood memories of riding horses. I thought it could fit as the song has some influences from Western cowboy movies. Filming me on the horse was pretty crazy as it had been ten years since I sat on a horse. I had totally forgotten about galloping. For the slow motion idea to work, the horse had to run pretty fast. I was holding on for my life!” 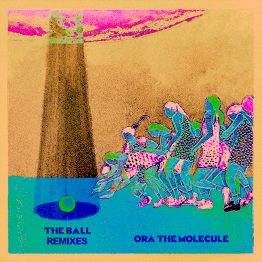