WATCH THE LIGHTSHIP SESSION & CHECK OUT THE OFFICIAL VIDEO 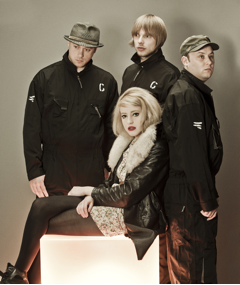 “YTCN bristles with ideas… enchantingly odd in parts, deftly pop in others” **** – Mojo

“Houghton follows her own idiosyncratic path. Where she treads others will undoubtedly follow.” **** – Uncut

With her dazzling debut album, Yours Truly, Cellophane Nose, picking up glowing reviews ahead of its February 28TH, 2012 release, Beth Jeans Houghton & The Hooves Of Destiny are set to release the giddy (but murderous) “Sweet Tooth Bird” with b-side “Telephone” as a digital single the week prior on February 21st.

Clocking in at a brisk 2 minutes 14 seconds (including psychedelic breakdown and trumpet fanfares) “Sweet Tooth Bird” is about sabotaging a relationship that’s too good. Or, says Houghton; “Something that is so good it’s bad. I think there is this strange feeling of guilt that we all get once we reach a stage of happiness. It is human nature to exist with grief and sadness.”

After the official video for “Sweet Tooth Bird” –– where we see Beth living in green houses in a post-apocalyptic world and building her own grave –– comes this live studio version from Beth and the boys at the Lightship95 Recording Studio, an old ship turned amazing studio docked at Trinity Buoy Warf in East London. Head over to themutechannel or PASTE to watch the band nail it. To check out the impressive space aboard Lightship95 and view photos, go to http://www.miloco.co.uk/studios/lightship95/image-gallery/

The debut album Yours Truly, Cellophane Nose was created with producer Ben Hiller (Blur / Elbow / Depeche Mode). It introduces one of the most self-assured new bands of the year, fronted by a pop polymath whose blend of psychedelia, glam rock and chain gang folk is quite unlike anything else you’re likely to hear in 2012.