AVAILABLE FOR THE FIRST TIME ON VINYL

“Under the moniker Fad Gadget, Frank Tovey pioneered a genre of electronic music which is now part of the mainstream.” – The Independent

“Never before or since has an artist captured the awkwardness, the strange humour, the revulsion and prurient joy of (especially British) sexuality and human physicality quite as effectively as Tovey” – The Quietus

Mute have announced a double silver-vinyl release of The Best of Fad Gadget, out on 6 September 2019. Available here for the first time on vinyl, part of the ongoing MUTE 4.0 (1978 > TOMORROW) campaign, the release marks the 40th anniversary of Fad Gadget’s debut 7”, the double A-side single, ‘Back to Nature’ / ‘The Box’.The original 2001 CD was the last release before the untimely early death of Frank Tovey aka Fad Gadget in 2002. The track listing, his personal selection, was designed to be both a concise retrospective of the Fad Gadget years and an introduction to his work for a new generation as he embarked on Depeche Mode’s Exciter tour as their special guest.

Fad Gadget was Mute’s first signing and the groundbreaking debut 7”, ‘Back To Nature’ / ‘The Box’ (Oct 1979), recorded using a drum machine and a synthesiser, was the second release on the label. Alongside Cabaret Voltaire, The Human League, Throbbing Gristle, Soft Cell and The Normal, Frank Tovey was at the forefront of the British electronic movement of the late 70s/early 80s and his live performances, drawing on his art school background and interest in performance art, were intense, spectacular and innovative.The Best of Fad Gadget features the classic singles ‘Ricky’s Hand’, ‘Fireside Favourite’, ‘Collapsing New People’ and ‘For Whom The Bells Toll’ (featuring Alison Moyet), b- sides and tracks from his celebrated albums, Fireside Favourites (1980), Incontinent (1981), Under The Flag (1982), and Gag (1984) as well as ‘Luxury’, taken from 1986’s Frank Tovey release, Snakes & Ladders.

This release is the first stage of Mute’s celebration of Frank Tovey’s work, to be followed by a career-spanning box set in early 2020 marking the 40th anniversary of his first album Fireside Favourites.

The Best of Fad Gadget tracklisting 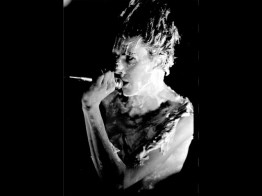