35 years on from their genesis in Yugoslavia, Laibach are the most internationally acclaimed band to have come out of the former Communist countries of Eastern and Central Europe, and one of the most enigmatic, prophetic and authentic music (and art) groups in the world. Founded in the industrial city of Trbovlje, in the so-called revolutionary Red District area of Slovenia in the year of the then-Yugoslavia’s leader Tito’s death, and rising to fame as Yugoslavia steered towards self-destruction, Laibach have consistently opposed labels of any kind, be they “rock”, “pop”, “techno” or “industrial”. Self-styled engineers of human souls, Laibach can make you think, dance and march to the same music.

With their latest album SPECTRE (released on Mute in 2014, almost two years before the newest James Bond film with the same title!) Laibach created an important step forward in their career. The group – which has never defined itself politically, but has constantly analysed politics through its work – comes across as politically engaged as never before. SPECTRE sounds like a political manifesto in poetic form. Laibach, who have always given the impression of controversy – particularly in terms of political orientation, now very clearly takes a position on the political spectrum, probably irreversibly abolishing its own political ‘freedom’ and neutrality.

This position adds a new dimension to the recent concert in Pyongyang. In August 2015 Laibach became the first ever band of its kind to perform in the secretive country of North Korea, a reclusive garrison state as well-known for its military marches, mass gymnastics and hymns to the Great Leader, as for its defiant resistance to Western popular culture.

Laibach’s Liberation Day’s concert coincided with the 70th anniversary of the Korean peninsula’s liberation from Japanese colonization and its subsequent division into two enemy states, which confront each other in an uneasy truce to this day. The concert was a great success and provoked a massive media debate around the world. The event and the whole of Laibach’s visit to North Korea was been filmed and will be the subject of the full-length documentary scheduled for premiere in spring 2016. The film trailer and an exclusive sneak preview of footage will be presented at Laibach’s Sound of Music Tour.

Last year Laibach returned from a successful tour across North America, and celebrated their 35th Anniversary with a special 4th of July concert at their home town of Trbovlje, followed by a traditional party gathering at nearby Mt. Kum and a rooftop concert at the Museum of Contemporary Art in Zagreb few days later.

The Museum of Modern Art in Ljubljana recently presented a historic exhibition on Laibach within their NSK retrospective.

At the 2016 Sound of Music Tour Laibach will present part of the programme that made up the Pyongyang performance including some extraordinary interpretations of the songs from the world’s renowned ‘Sound of Music’ musical during the 2016 tour. In addition, the band will also perform some of their older songs, among them ‘Now You Will Pay’ and ‘The Great Divide’ from the 2003 album WAT – both dealing with the emigrant crisis and refugee problematic in Europe and Middle East.

On this tour the band will also perform a concert in Berlin’s Haus der Kulturen der Welt, as a part of events, dedicated to commemoration of the 100 Years of the Big War, and on February 9th Laibach will present a very special show with RTV Symphonic orchestra and mixed choir in Henry Le Boeuf Hall in Palaise des Beaux-Arts in Bruxelles.

For full tour dates and the latest information, please go to: http://spectre.laibach.org/tour-dates/ 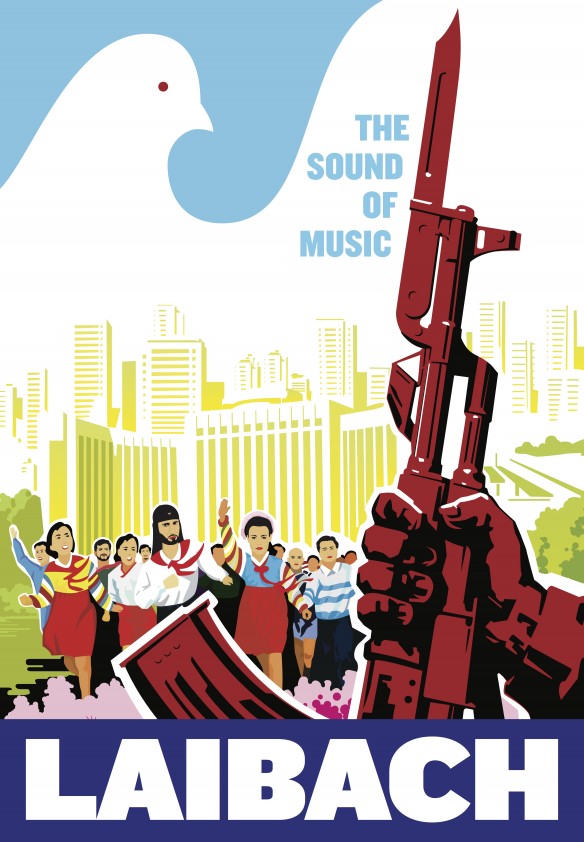