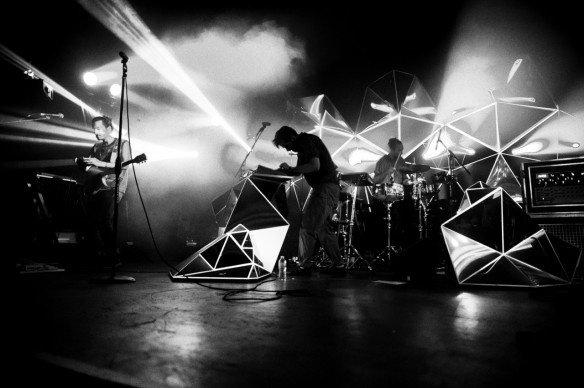 Yeasayer have announced details of a limited edition live album, available on double vinyl with booklet and download from 25 November 2013.

Good Evening, Washington D.C. was recorded as part of the band’s worldwide Fragrant World tour, on their sold out two-night stand at Washington D.C.’s legendary 9:30 Club on 14 and 15 November 2012.

A booklet accompanies the package, with extensive sleevenotes written by the artist Christopher Kline, detailing the origins and inner-workings of each song from Fragrant World, the band’s acclaimed third studio album, out now on Mute.

‘Glass of the Microscope’ was directed by Ruben van Leer & Jamie Timms (‪http://www.truth.io) and shows the band in a dystopian laboratory, seemingly battling an unnamed virus.

Yeasayer also has a brand new song in the video game smash Grand Theft Auto 5. ‘Don’t Come Close’ is a live favourite, unreleased until now. The track can be found on the radio station within the game, and is unveiled at the end of Grand Theft Auto 5, depending on choices you made.

“Yeasayer may be an acquired taste but it’s a taste you’ll probably say ‘Yea!’ to” The Sun

“This is pop music Jim, but not as we know it” 4/5 Evening Standard