LIARS release a remix EP today, VFCF (Variations From Crying Fountain), featuring reworkings of ‘Staring At Zero’ and ‘Cred Woes’, two of the singles from Liars’ latest album TFCF. ‘Staring At Zero’ has been given the remix treatment by Mark Reeder, the director of B Movie: Lust &amp; Sound in West Berlin (1979-1989), who recently remixed New Order’s Academic and 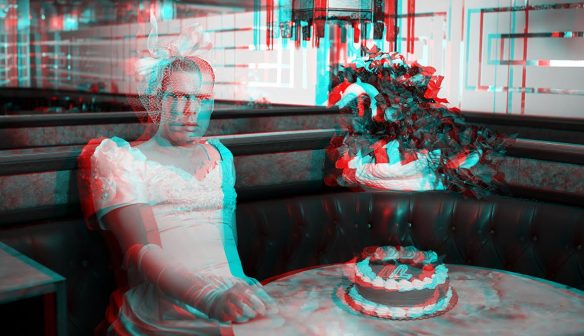 ADULT., who released their latest album, Detroit House Guests, on Mute. ‘Cred Woes’ has been reworked by 33, aka Mary Pearson of High Places and LA’s HXXS, whose recent album release, MKDRONE, was produced by Angus Andrew.

Listen to the EP here

Liars have, as a matter of course, sounded radically different with each album, pursuing new. concepts and occupying diverse mindsets. On TFCF, Liars’ eighth studio album, the bustling backdrops of Los Angeles, Berlin and New York have been replaced with a presence far more intimate and autobiographical as Liars once again boldly step out of their comfort zone into vastly new musical territory and reinvent the band’s paradigm – blurring the lines between electronic and acoustic, between the experimental impulse and the addictive pop sensibility.

Angus Andrew decamped to his native Australia, specifically to a remote part of the Australian bush, to create an album unlike any Liars had attempted before. Cut off from the rest of the world in his remote home studio, with no other distractions, Angus gave free reign to artistic impulses he’d never explored and those included experimenting with the acoustic guitar and sampling. Liars were recently shortlisted for the 13 th Australian Music Prize awards, due for an announcement later this year.

PRAISE FOR TFCF
“TFCF signals yet another rebirth.” – Spin

“…a fractured, aching record… a mess worth unravelling” – The Skinny