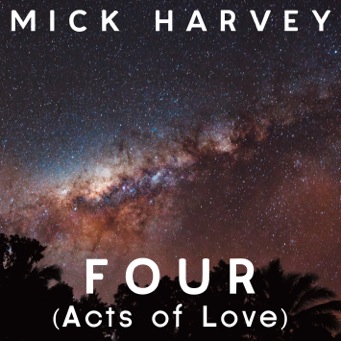 Mick Harvey is pleased to announced details for his latest solo album, FOUR (Acts of Love), a follow up to 2011’s Sketches from the Book of the Dead, due out via Mute on June 11th, 2013.

This is the sixth studio album from this prolific musician, a man renowned for his career with The Birthday Party and Nick Cave & The Bad Seeds as well as for his work with soundtracks (Chopper, To Have And To Hold, Australian Rules).  In addition to his solo recordings and his feature length soundtracks his work as a Producer also speaks for itself having worked with Anita Lane, Rowland S Howard and most recently PJ Harvey’s Mercury Prize winning album, Let England Shake.

FOUR (Acts of Love) was recorded on two continents at Grace Lane in North Melbourne and Atlantis Sound in Melbourne and features original compositions from Harvey in addition to exciting re-interpreatations of classic hits. Regular

collaborators Rosie Westbrook on double bass and JP Shilo on guitar and violin lent their talent, alongside new collaborators such as PJ Harvey “Glorious.”

Harvey takes a turn at revisiting classics such as The Saints ‘The Story of Love’, Van Morrison’s ‘The Way Young Lovers Do’, Exuma’s ‘Summertime in New York’ and Roy Orbison’s ‘Wild Hearts (Run Out of Time)’.

FOUR (Acts of Love) is a contemplation on romantic love – its loss and re-awakening, its tumultuous struggle and its place in our universe.

The album is a song cycle, divided into 3 Acts.

1. Praise the Earth (Wheels of Amber and Gold)

3. Midnight on the Ramparts

5. Where There’s Smoke (before)

6. God Made the Hammer

7. I Wish That I Were Stone

8. The Way Young Lovers Do

14. Praise the Earth (An Ephemeral Play)

The album’s release follows a series of dates including shows with Einstürzende Neubauten through Australia and his first ever solo New Zealand tour. Mick Harvey has also announced a performance of interpretations of the songs of Serge Gainsbourg at ATP’s Yeah Yeah Yeahs curated I’ll Be Your Mirror on May 4th. (Full details below, more European dates in support of the new album to be announced).

Later this year Mick Harvey will release a box set of his songs of Serge Gainsbourg, translated into English featuring the albums Intoxicated Man (1995) and Pink Elephants (1997) and bonus tracks.