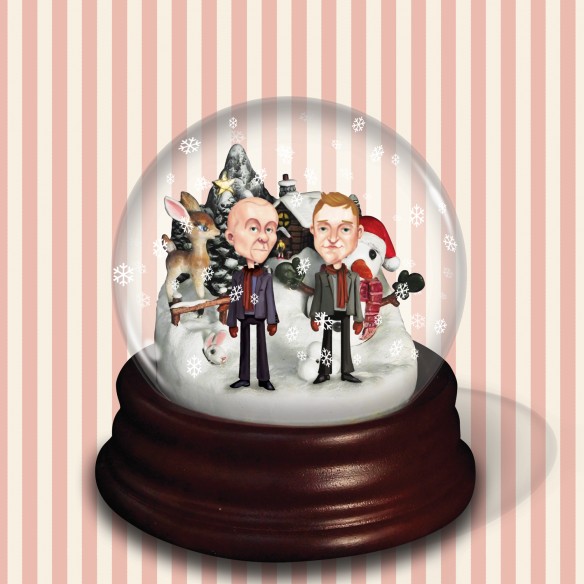 Erasure have announced a new album release, Snow Globe, out on 11 November 2013. Snow Globe is a collection of original compositions and seasonal classics, and follows 2011’s album, Tomorrow’s World.

The first single, ‘Gaudete’, is Erasure’s take on the traditional Latin carol, which will be recognisable by many after Steeleye Span’s version in the early 70s.

“I haven’t actually heard him sing better,” says Vince of Andy stepping back into the booth. “I found my inner choirboy again,” says Andy. “I thought I’d lost him but he was there all along.”

Unlike the bells and whistles, glitter and tinsel sets that crowd the market come Christmas-time, Snow Globe is possessed of something more in the wistfully, strangely subdued celebratory mould of recent seasonal albums by Tracey Thorn and Kate Bush. ‘We managed to strip everything back to bare essentials,’ Vince says approvingly of the minimal approach Erasure took for this recording. “‘White Christmas almost has a drone all the way through it. I love that.”

Formed 28 years ago, the award-winning songwriting duo of Vince Clarke and Andy Bell unleashed on the nation a succession of both influential and chart-topping pop anthems of the ‘80s, ‘90s through to today. Songs like ‘A Little Respect’, ‘Sometimes’, ‘Victim Of Love’, ‘Ship Of Fools’, ‘Blue Savannah’, ‘Star’, ‘Chains Of Love’, ‘The Circus’, ‘Who Needs Love (Like That)’, ‘Love To Hate You’, ‘Drama!’, “Always” and “Breathe,” ensured a formidable presence on the singles charts complemented by five consecutive No 1 albums (including The Innocents, Wild! and Chorus) and the beginning of the worldwide Abba revival, ‘Abba-esque’.