– OUT NOW, RELEASE FILM: “THE INTERVIEW” 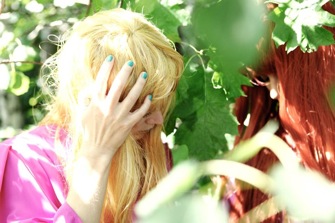 The Knife have released a short film ‘The Interview’.  Created in conjunction with Marit Östberg who directed the “Full of Fire” video, it goes some way to explain their intentions and thought processes behind their startling new album Shaking The Habitual, released this week to wide critical acclaim. You can watch the film HERE.

“We didn’t plan to make another album

Music can be so meaningless

We had to find lust

to find something less predictable

to let go of what we already knew about music

explore what we didn’t

step in to oblivion

by entering the work process with an open and inquiring mindset, the record turned in to something completely different than it would have been if the end goal had been a finished album all along

Once you stop caring about rules.”

You can buy Shaking The Habitual now from http://theknife.net/shaking-the habitual or http://www.itunes.com/theknife

“Shaking the Habitual is, inarguably, an achievement.

It is the Knife’s most political, ambitious, accomplished album, but in a strange way it also feels like its most personal”

“-a fearless piece of work with its own logic, one that shears away all safety nets.”

“Instead of sharing different heartbeats, she and brother Olof Dreijer are once again quickening them.”-SPIN

“Most significantly, in an age of torpid postmodern pastiche, they are amongst those rarest of musical creatures…in that they create art that is not only imperative and urgent, but also fascinatingly difficult to codify”-Filter

“Theirs is the place where things go bump in the night—a place where the dark side of politics and dance music meet.”-Under The Radar 8.5/10