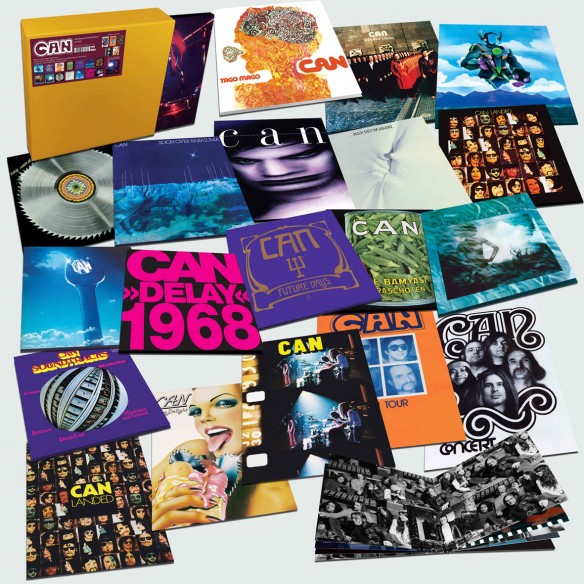 Following on from the success of The Lost Tapes, Mute and Spoon release the long-awaited remastered catalogue vinyl box set – 17 pieces on 180g vinyl housed in a linen wrapped box – on 2 December 2013. The box is numbered, and limited to 1500 worldwide, pre-order here: http://can.sandbaghq.com.

The box set features all 13 of the band’s classic albums, alongside Out Of Reach, which has been unavailable in any official format since its original release in 1978 plus Can Live, a bonus live disc featuring the classic Can line up of Holger Czukay (bass), Michael Karoli (guitar), Jaki Liebezeit (drums) and Irmin Schmidt (keyboards). Can Live was recorded at Sussex University in 1975 and will be unavailable in any format outside of the Can Vinyl Box.

The artwork for the individual albums is all in its original form and five posters and a 20-page 12” booklet accompanies the box set featuring unseen photographs from the Can archive and sleevenotes by the acclaimed author, Alan Warner (Morvern Callar). In addition, the box set will include a download code for each of the albums, except Can Live, which is available on vinyl only.

Can and Spoon have collaborated with Die Wunderkammer in Germany to create special Can lyric cutlery, go to http://bit.ly/1bbC7bi to see the range which includes “Bring Me Coffee Or Tea” teaspoons.

Irmin Schmidt’s VILLA WUNDERBAR, a 2CD set, compiling the work of Can founder Irmin Schmidt’s solo and soundtrack work, is out this week on Mute. Featuring two unreleased Can remixes and a collection of soundtrack pieces personally compiled by long-term collaborator Wim Wenders, the compilation has sleevenotes by Wenders and long time collaborator Duncan Fallowell. Listen to a sampler here: https://mute.com/mute/villa-wunderbar-double-cd-compilation-out-4-november