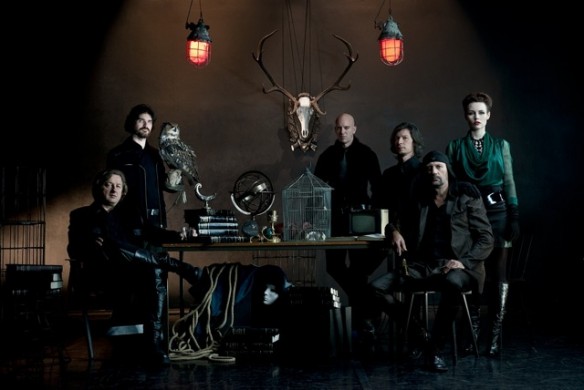 LAIBACH release a brand new album, SPECTRE, on CD, vinyl and download on 3 March 2014. The deluxe edition of the album will come with four extra tracks plus the SPECTRE Partybook: a laminated linen bound party membership book with SPECTRE’s manifesto and an invite to register your allegiance to its thesis.

SPECTRE follows the band’s widely acclaimed conceptual album VOLK (2006) – where Laibach interpreted national anthems of historically imperialistic nations – and the release of the side projects LAIBACHKUNSTDERFUGE (2008) and IRON SKY: The Original Film Soundtrack (2012), watch a trailer for the new album here:


SPECTRE’s release will be followed by a worldwide tour, which includes dates at KOKO, London as well as the band’s first foray into China: a live date on 22 March will be preceded by a Laibach Kunst exhibition (17 January-20 March), plus a Laibach Seminar at the City University of Hong Kong on 21 March.

The album opens with The Whistleblowers, a contagiously optimistic piece of classic “militant & symphonic” Laibach, sounding like the sequel to Lieutenant F. J. Ricketts’s 1914 “Colonel Bogey March”. This rousing whistle along track – “From North and South / We come from East and West / Breathing as one / Living in fame / Or dying in flame”” alludes to the heroism of the new, ‘digital’ Prometheans of freedom – Bradley Manning, Edward Snowden, Julian Assange.

No History, knows no mercy, and leaves no doubt: Laibach require uncompromising action, they demand bravery and boldness and seek heroes “who will be the creed of a new political faith”. And, in one of the verses of this song, listeners can find a mini-‘manifesto’ about the album itself, its sonic expression, and the position of the group in relation to its own history.

In amongst these rallying calls from the band, sits a rare Laibach love song: We Are Millions And Millions Are One deals with love in today’s impossible times, times which are dangerously close to the fictional reality of classic anti-utopian novels such as Yevgeny Zamyatin’s We (Мы), Laibach’s inspiration for this song.

Ending the album is the elegant utopian song Koran a track that shows the possibility of a better and fairer world – on Earth or in the hereafter. Koran – which literally means ‘recitation’ (also another key Laibachian trait) –, of course, to some extent also refers to the series of uprisings, revolutions and wars in the Arab world that have been taking place in the past few years and which refuse to sink. Consequently, the album ends with the (in)complete, open, unfinished sound of a piano key…

Listen to Resistance Is Futile here: