LISTEN TO A NEW TRACK, SETU

Over two albums Émilie recorded and released as Tiny Feet but her recent name change, which pays homage to her personal and family history by referencing her maiden name, represents a fresh start musically.

QUINQUIS [pronounced kɛ̃kis], signed to Mute and released ‘Adkrog’ (which aptly translates as ‘Start Again’) late last year, and returns today with a new track to launch her album.

Listen to ‘Setu’ here. Driven by scattered beats, floating vocals and considered sonic textures, this is the latest track to be taken from SEIM:

Over a period of significant personal change, Émilie began forging a deeper connection to her own culture, history and identity, exploring new musical terrain and, became a mother. Émilie explains, “To have a son has answered many questions I had about life and roots, the first step to a very deep discovery. I’m raising my child in the Breton language, so there has been this kind of rebooting of the whole system.”

Whilst on tour with her husband and baby, Émilie saw her musical expression as a journey and began work on a new idea in each city. Characters – some from her own life, others rooted in the history of Breton culture – began to join Émilie on this journey, coming alive in song ideas. She discovered Ankou, a servant of death in Breton mythology, who appears on ‘Setu’; she explored Seiz Breur, a 1923 Breton art movement founded by a young woman in the very same small village she is from; she tapped into the lives of friends, exploring a rich tapestry of people, places, emotions and stories all tied together by a shared commonplace: Brittany. “I put the stories of those people around mine so that I could have them share this journey with me.”

Once these ideas began to mutate into something more musical, she connected with Gareth Jones. Initially he was going to play synth but their partnership grew into something more collaborative. “The record revealed itself in the back-and-forth Gareth and I had,” she says. “It was really unexpected because Gareth and I are quite the opposite – he was the light to my darkness.”

The result is an album that merges sparse electronics, immersive atmospherics, and deft melodies, carried by Émilie’s tender yet quietly soaring vocals, which are all sung in Breton.

Further collaborators on the album include Ólavur Jákupsson, who sings in Faroese on ‘Run’ (which translates to ‘Hill’), and the writer and endurance cyclist Emily Chappell who features on ‘Netra Ken’, reading an extract from her book in Welsh.

Nature is key to the album and lends itself to the title (which translates as “sap”), as well as key themes in individual songs. Her own local community is reflected in tracks such as ‘Ôg’, a story about a woman from Ushant who lost her husband at sea while she was 8 months pregnant and found help with the baby from the widows of the other 51 men on board.

This sense of interconnectedness leads to the album being a multifaceted one. It is deeply personal and introspective yet also collaborative and expansive. It is rooted in both historical and modern stories. It is an album that connects worlds while being entirely its own. “There is something cosmic about it,” says Émilie. “I don’t know how to explain that but the way it happened with Gareth, and the way everything just suddenly all came together feels like cosmic harmony.” 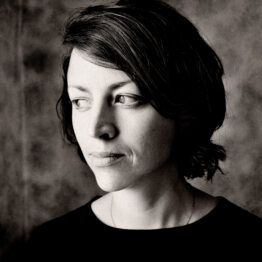