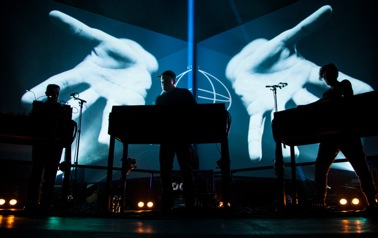 Watch the trailer for the Brooklyn show below:

Moderat are heading stateside this Spring to perform at the 2014 MoogFest in Asheville, North Carolina alongside Kraftwerk, Giorgio Moroder, Flying Lotus Factory Floor and many others. Moderat’s set is scheduled for Friday, April 25thd – the festival runs from April 23rd-27th. MoogFest prides itself on being the Synthesis of Technology, Art and Music, and we couldn’t imagine a better place for this trio of Berlin-based collaborators, Sascha Ring (Apparat), Gernot Bronsert and Sebastian Szary (Modeselektor), to unleash the epic live show for their sophomore album II.

Following their festival set, the band will journey north to Brooklyn for a warehouse experience unlike any other. On Saturday, April 26th Sascha, Gernot and Sebastian will perform Moderat’s exuberant show at a location to be announced in the coming weeks. Teaming up with TBA Brooklyn, Resolute and Wordless Music Series, Moderat are excited to present to US fans the show that has been igniting European audiences over the past few months. Tickets for this show are available HERE. Watch a trailer for their upcoming Brooklyn Performance here.

The last we shared from Moderat was their latest single, “Last Time” from critically acclaimed sophomore album, II (Mute / Monkeytown Records) “Last Time” EP includes an exclusive instrumental version of the single, an alternate version and a guest remix by one of the most exciting acts in electronic music in 2013, Jon Hopkins. Coinciding with the single release was the video for “Last Time” directed and produced by Pfadfinderi.

“Lush and introspective, but still heavy-hitting”