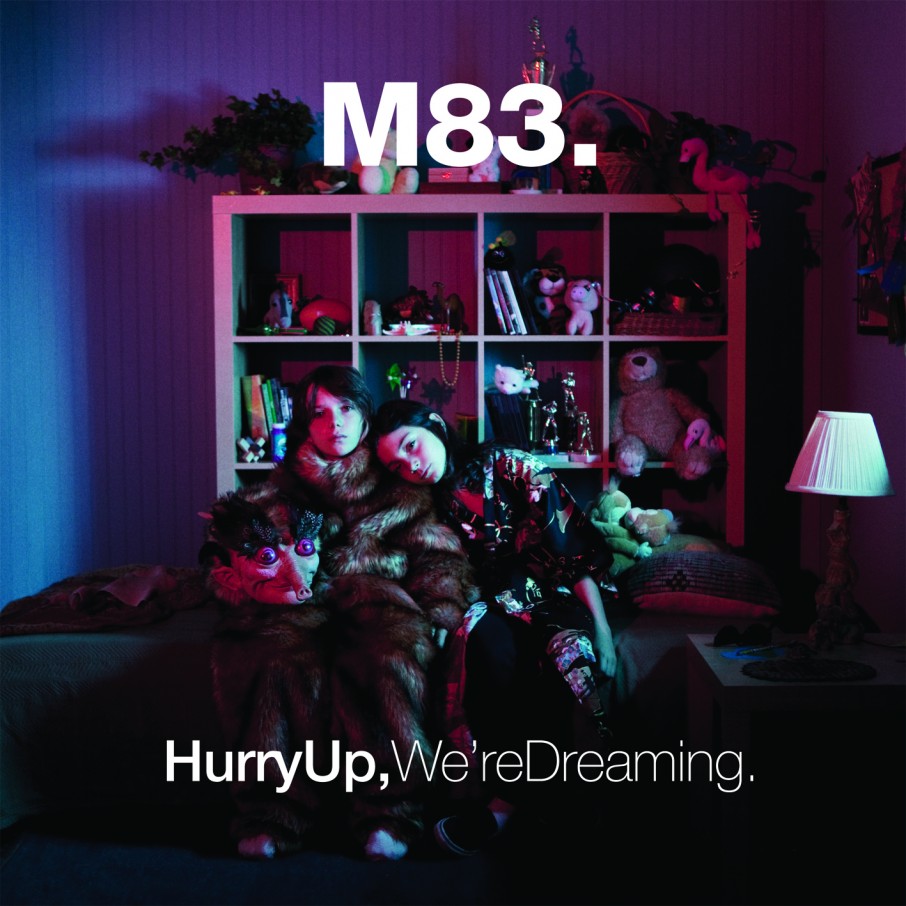 With these soft spoken words on the simply-titled opening track–“Intro”– M83 mastermind Anthony Gonzalez introduces us to his sixth record and first double disc album, Hurry Up, We’re Dreaming.

Dauntlessly singing into the void that was left behind since Saturdays=Youth, Gonzalez suddenly surges with overwhelming emotion as the music mounts an invisible precipice. Historically, he softly eased you into his world, introducing you to the lush and radiant spaces between captivating melodies and intimate lyrics, but not this time. Not on this record.

Graduating from the fuzzy, fumbling emotional cobwebs and draped ambiance of past records, Hurry Up, We’re Dreaming careens past its audience. Brazenly stretching out along the horizon, spilling glittery, golden arms of sound across the landscape, it holds your breath hostage without you even noticing you were missing it. If it seemed that Anthony was basking in the sunshine-drenched days of his youth when he released Saturdays in 2008, then it can be said that in 2011, at the age of 30, he is tempestuously charging towards his future with Hurry Up, We’re Dreaming.

Relocating to Los Angeles from Antibes, Gonzalez surrounded himself with players pivotal to completing his childhood dream of a double disc record. Producer Justin Meldal-Johnsen (Beck, NIN, The Mars Volta, Goldfrapp) and guitarist Brad Laner (from 90’s band Medicine) had been hugely influential on Anthony growing up and now were central to the new record’s creation.

“In France there is this show on TV where at the end there is a musical guest who plays one or two songs. I remember one night when I was a teenager being at home watching the best of performances and looking at this crazy bass player with a big afro and thinking,  ‘Wow this guy is so cool.’ “And now I am working with him. It’s so intense that thinking about it makes me feel weird. But it’s weird in a super good way. Same thing with Brad, I was listening to his music when I was first getting into music and now he’s on my album.”

Anthony and Justin met backstage in 2009 at Scotland’s T In The Park. Later, “he came to me very genuinely stating that ‘he was a fan and that he would love to work with me,’” explains Gonzalez. “I love when people do that because I can tell it’s coming from the heart. He was sincere and that’s the way I like to work with people.”

Stepping away from his work with producers Ken Thomas and Ewan Pearson on Saturday, Gonzalez freckles his new chapter with signature M83 fingerprints while pushing himself beyond the constricting emotions of a guarded musician. Bored with being frustrated and shy, Anthony is respectful of the precious time given to him and doesn’t want to leave behind any regrets, thus thrusting himself into the spotlight vocally. He tests out different ways of singing, ranging from a spectral breathy whisper to a howling scream, and each voice clings to us like a dew-heavy spider web at dawn.

Fans will recognize band member Morgan Kibby, her vocals flirting with the shadowy places in between verses, leaping off the record in spoken word or blending with an adult choir. Morgan will join Anthony on tour but she was never meant to sing as much on this record as she had on pervious projects. Quenching his desire to work with a different person on each record, Gonzalez added LA-based chanteuse Zola Jesus to the mix for the completion of “Intro.” “The song was already written but I really wanted a female vocal on it and I was kind of struggling to find the right person, but then I heard her music and it just made sense.”

Where Saturday=Youth is drenched in lustful exploration and hungry adolescent wonder, Hurry Up is decadently cunning and seductive. “Intro” and “My tears are becoming a sea” eerily croon to you, swirling all of the glitter and growth from the past records into an epic swell, mysteriously and dramatically warning you of the impact you are about to experience. “Midnight City” (disc one) and “OK Pal” (disc two) are humid, adrenaline driven dreams unlike anything we have heard from M83 in the past. “Midnight City” adeptly sweeps you through abandoned concrete streets swimming in broken neon light and aggressively pushing and pulsating to synthetic beats. While “OK Pal” catcalls you to a locker full of mapped out Peter Gabriel-esque echoing lyrics, leaving you stranded in a post-apocalyptic landscape. These journeys are about awakening, craving and conquering. Throughout Hurry Up, We’re Dreaming Anthony carries the listener to different countries of sound in his own universe, “We didn’t need a story, we didn’t need a real world. We just had to keep walking and we became the stories- we became the places.” Drifting away from his previous records and reigned in politeness he unleashes all that he has been dreaming of and yearning for. Even when he takes a second to look back on “Echoes of Mine” the velvety, elderly voice of a woman heartbreakingly tells the story of a girl drenched in the shadows of her youth, knowing she has to grow up.

Grandiose in scale and inspired by Smashing Pumpkin’s revered double disc Melancholy & The Infinite Sadness, Anthony has long had the goal to create his own monumental double disc record.  “I saw when I was a teenager that I could dig into it [the album]. It was like a treasure. If I were a teenager nowadays I would try to find something as creative as this album. They had so much to say in their songs.”

Impressed with the juxtaposing sun and moon artwork featured on Melancholy, Anthony focuses in on another natural duality: siblings.  The cover artwork mirrors this relationship, featuring a photograph of a little boy with a little girl sitting on a bed. The photograph perpetuates the conversation for the two distinct voices we behind each disc, representing two sides of an overall piece that are almost the same. “I want people to listen to it as two different human beings that are connected somehow, but every song on the album has a secret on the other side.”

Soaring and scraping up against the sky while sharing each uncharted frontier with new collaborators is what M83 does best. Gracefully coming into the next decade of his life, Anthony delivers what makes each record sincere, innocent, and full of joy: he gives us his past and his future.

“I think it is a reflection of my 30 years of being a human being. It’s a compilation of all my previous music together. It’s a retrospective of myself.”