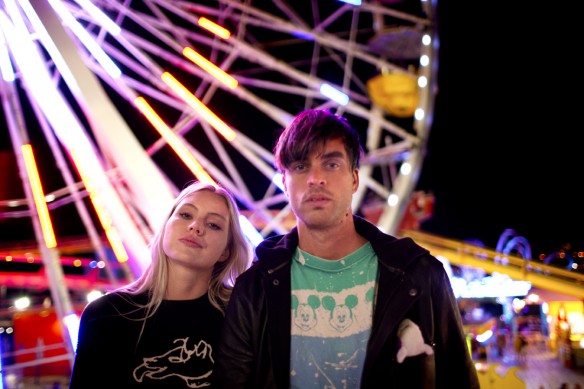 Big Deal might have become synonymous with the structurally sparse yet emotionally stinging guitar pop as showcased on their critically acclaimed debut “Lights Out”, but get ready for a dramatic expansion of sound with their latest album “June Gloom”. The London based duo of Kacey Underwood and Alice Costelloe, aka Big Deal, are set to release the new album on Mute in Summer 2013.

Last year’s thunderous teaser ‘teradactol’ track, with its monstrous riffs and galloping drums was no red herring: on “June Gloom” Underwood and Costelloe flesh out their delicate, nocturnal tones with the help of a full band. Drums and bass take their sound to deeper, darker and more intoxicating heights, courtesy of producer Rory Attwell (Veronica Falls, PAWS, Male Bonding).

As a result, the 11 other tracks here are an exploration of the newfound confidence of ‘teradactol’, with a refinement and bold directness in singing and songwriting. Here, you’ll find a re-imagination of the golden age of alternative-rock; crunching grunge pop anthems sitting neatly alongside shimmering love songs aching with weariness and longing. If Big Deal’s earlier tracks felt emotionally lacerating, this new body of work is noisy, boisterous, with a more than assured melodic hook.

This evolution is made defiantly clear in the opener ‘golden light‘, which deliberately wrongfoots the listener by opening with some sweetly strummed chords and interlocking vocals before building to a rousing climax. Similarly, ‘dream machines’ crests on a jagged undertow of pounding drums, and the sinister ‘pillow’ gradually opens up to become something vast, scorched and desolate. The pair infuse the volume with their own inimitable, off-kilter take on angst-ridden emotional terrain; on the aptly titled ‘pristine’, they sing, “darkness wash over me, I let it in, it let me be”, while on the otherwise upbeat ‘call and i’ll come’ Costelloe plaintively asks, “What if no one else compares/ what if no one else cares?”.

It all reaches a beautiful crescendo with the finale ‘close your eyes’, which explodes from an almost unbearably intimate confessional (“I won’t ask why/ if it was love/ we let it die”) into a coruscating maelstrom that is as indelibly affecting as it is thrilling. With “June Gloom”, Big Deal have expanded their sonic palette for sure, but they have certainly lost none of their potency.